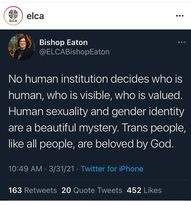 So Bishop Eaton of the ELCA tweeted out the other day "No human institution decides who is human, who is visible, who is valued.  Human sexuality and gender identity are a beautiful mystery.  Trans people, like all people, are beloved by God."

But if she really meant those words, the ELCA would not support abortion or pay for abortions in their health insurance plan or stand silent before the legal genocide of millions since 1973.  But since the ELCA does support a woman's right to choose, pays the bill for abortions without hesitation, and has no voice on behalf of the unborn, it is clear that these are not just words, these words do not mean what they say, and they are not theological.  These are political words.  The issue is political and so a theological approach to this issue will not suffice.  Neither will it compromise the political stance since the words could and should also apply across the board (including the unborn) if they meant something at all.  But they have no theological or moral meaning except to show solidarity with a political stand.

A human institution has decided who is human.  The SCOTUS and a body of law since its landmark decision in 1973 have done exactly that.  The current US President has insisted that this must be protected with legislation to safeguard the woman's right of choice should perhaps the courts reconsider the decision.  By this decision, the court has decided that the unborn are invisible before the law and have neither voice nor standing.  Further, they have decided to value the mother and her choice over the life of the child in her womb.  This is a value judgment not only at odds with the Bishop's tweet but also in consistent with other laws (particularly the laws that would charge one with murder for the killing of the child in the womb).  It is not theology.  It is not science.  But it is politics.

Quite apart from the rightness or wrongness of the stance itself, the idea that a church body would choose politics over theology is itself an issue worth a conversation.  Of course, the ELCA is not the first nor will it be the last to do so but it has, of late, been a pretty reliable and consistent voice for the politics of sexual preference and gender identity.  When the 2009 CWA chose to ignore Scripture and Lutheran confessional stand on same sex marriage, it did acknowledge that this was a breach of continuity and that this was a new path.  Yet what it did not acknowledge or admit was that this was a political stance and a political stance in conflict with the whole history of the Church's beliefs and teaching through the ages.

Such a statement by a church body and its leader only illustrates the moral bankruptcy of churches who have chosen the politics over the truth.  Furthermore, they have done so by raising up a straw man.  No one says that the trans are not loved by God or that God does not also seek their redemption as He does any sinner.  No one has suggested that trans or any other be stripped of their rights to live and work and own property but this church body and those who share this political view find no conflict in stripping the unborn of their right to life, of their own future of work as members of society, and of their right to establish a home.  The inconsistency here is not theological and never was.  It was and is political.  The sooner this is admitted, the sooner these churches can give up the illusion of theological and moral integrity.

At the 2001 LCMS Convention, delegates approved [706 to 343] Resolution 3-21A (Proceedings, p. 142), which resolved, “That the 2001 synodical convention affirm the late President Alvin L. Barry’s judgment that ‘we cannot consider them [the ELCA] to be an orthodox Lutheran church body’.”

Wilken: "Is apostasy too strong a word to describe what we’ve watched over the last — better part — of the decade that culminates this afternoon in the Evangelical Lutheran Church in America?"

Harrison: "No, it is apostasy. There’s no way around it. It gives me great pain to say that, but there’s no other word for it."

In its 2012 “Response” to the ELCA’s 2009 decision to recognize “homosexual marriage,” the LCMS Commission on Theology and Church Relations stated (p. 21): “The ELCA has now taken this step, embodying apostasy from the faith once delivered to the saints.”

Thus the ELCA organization has been recognized by the Missouri Synod and its leaders as neither Lutheran nor Christian. The XXXA is now a tool of Satan.