When you pass through fire you shall not be burned. . . 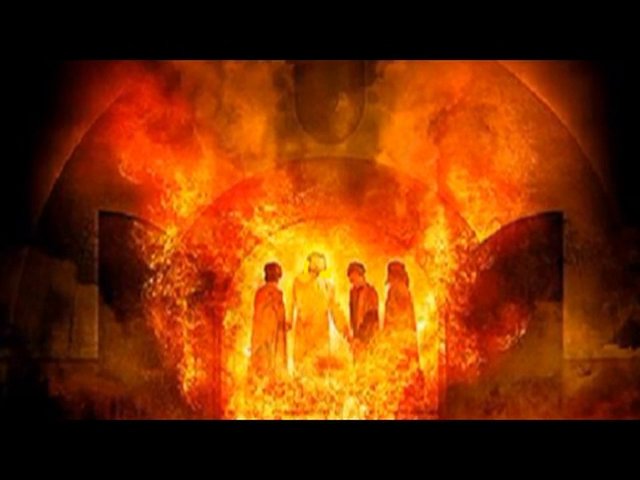 8At that time certain Chaldeans came forward and maliciously accused the Jews. 9They declared to King Nebuchadnezzar, “O king, live forever! 10You, O king, have made a decree, that every man who hears the sound of the horn, pipe, lyre, trigon, harp, bagpipe, and every kind of music, shall fall down and worship the golden image. 11And whoever does not fall down and worship shall be cast into a burning fiery furnace. 12There are certain Jews whom you have appointed over the affairs of the province of Babylon: Shadrach, Meshach, and Abednego. These men, O king, pay no attention to you; they do not serve your gods or worship the golden image that you have set up.”

13Then Nebuchadnezzar in furious rage commanded that Shadrach, Meshach, and Abednego be brought. So they brought these men before the king. 14Nebuchadnezzar answered and said to them, “Is it true, O Shadrach, Meshach, and Abednego, that you do not serve my gods or worship the golden image that I have set up? 15Now if you are ready when you hear the sound of the horn, pipe, lyre, trigon, harp, bagpipe, and every kind of music, to fall down and worship the image that I have made, well and good. But if you do not worship, you shall immediately be cast into a burning fiery furnace. And who is the god who will deliver you out of my hands?”

16Shadrach, Meshach, and Abednego answered and said to the king, “O Nebuchadnezzar, we have no need to answer you in this matter. 17If this be so, our God whom we serve is able to deliver us from the burning fiery furnace, and he will deliver us out of your hand, O king. 18But if not, be it known to you, O king, that we will not serve your gods or worship the golden image that you have set up.”

24Then King Nebuchadnezzar was astonished and rose up in haste. He declared to his counselors, “Did we not cast three men bound into the fire?” They answered and said to the king, “True, O king.” 25He answered and said, “But I see four men unbound, walking in the midst of the fire, and they are not hurt; and the appearance of the fourth is like a son of the gods.”

26Then Nebuchadnezzar came near to the door of the burning fiery furnace; he declared, “Shadrach, Meshach, and Abednego, servants of the Most High God, come out, and come here!” Then Shadrach, Meshach, and Abednego came out from the fire. 27And the satraps, the prefects, the governors, and the king’s counselors gathered together and saw that the fire had not had any power over the bodies of those men. The hair of their heads was not singed, their cloaks were not harmed, and no smell of fire had come upon them. 28Nebuchadnezzar answered and said, “Blessed be the God of Shadrach, Meshach, and Abednego, who has sent his angel and delivered his servants, who trusted in him, and set aside the king’s command, and yielded up their bodies rather than serve and worship any god except their own God.”