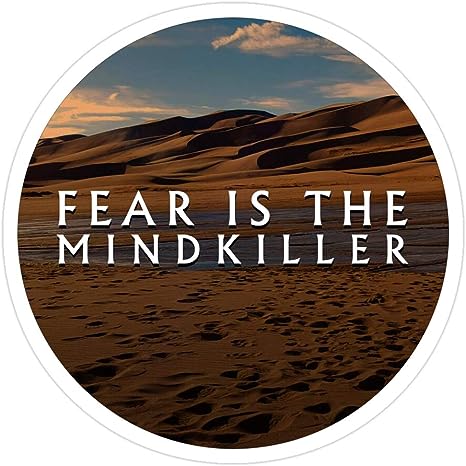 Sermon for the Second Sunday of Easter, preached on Sunday, April 11, 2021.

Alleluia!  Christ is risen!   He is risen, Indeed.  Alleluia.

Frank Herbert’s great scifi thriller Dune includes this prescient phrase:  “I must not fear. Fear is the mind-killer. Fear is the little-death that brings total obliteration. I will face my fear. I will permit it to pass over me and through me. And when it has gone past I will turn the inner eye to see its path. Where the fear has gone there will be nothing. Only I will remain.”  The phrase is set in the context of a test.  The hero puts his right hand into a device that creates pain in his mind.  It was a test of his humanity.  Intuitively we run from fear but it is possible to overcome our fear.

Fear was the mind-killer for Jesus’ disciples.  It choked their memory and clouded their reason.  They should not have been surprised by His resurrection from the dead.  Jesus had told them as often as He prophesied His suffering and death that He would rise from the dead.  He had told them to head to Galilee where He would wait for them.  But in their ears and minds they did not hear.  They did not believe.  They were transfixed by their fear.  The women who went to the tomb on Easter ran back home in fear.  Peter and John who ran to the tomb to find out what happened were caught up in fear.  Now it found them behind locked doors waiting.  Jesus had already come once in the night and through the locked doors.  They had seen the risen Savior once but a week later they were still behind locked doors.  Fear is a killer of faith.

It has been a year now since we lock up our doors, hid behind our masks, shut down our economy, and waited for a virus to go away.  Fear kept our nation captive and we are still afraid.  It will not take much to shut down our schools again, to furlough workers from their jobs, to empty the stores, bars, and restaurants, and close churches.  Fear is the mind-killer.  It is the little death that kills our hope and steals our confidence and holds us captive.  I am speaking here to Christians who should know better.  We confess a Gospel of the resurrection of the body and the life everlasting but, if given a choice, too many of us will choose being safe today over any risk that may come to us in God’s house, gathered with other sinners around His means of grace.

When Thomas missed out on Jesus’ coming and rejected the witness of the disciples who had seen the Lord, Jesus showed up to call him to repentance and to faith.  It is time for truth telling now.  We need to repent.  We need to repent of our faith held captive by our fears.  We need to repent of believing the Gospel but not enough to risk living life with this hope – especially in the face of a pandemic.  We need to repent as a church body for the way we closed doors and left the people of God to fend for them selves with videos instead of the body and blood on the tongue and the Word in the ear.
Pastors like me need to repent of trying to calm fears instead of preaching repentance. Fear is not a crises to be managed.  God does not manage the crises of our lives but confronts them with the power of the resurrection.  H calls His people to believe, to trust, and to live prudently, to be sure, but to live faithfully.  We all have enough to repent of and none of us is without blame or shame.  But look at how Jesus deals with the fearful.

Jesus does not try to tell Thomas or the rest of the disciples that their fears were not real or legitimate.  Instead, He points them to the one thing more powerful than fear. He shows them the signs of the Kingdom in the scars of His suffering and the marks of His death.  He confronts Thomas with the death that killed death and the life that death cannot overcome.  The only way out of fear is the Gospel, spoken through the mouth of the preacher by the voice of the Savior, felt in the splash of baptismal water that has the power to give new life, and tasted in the bread that is His flesh and the wine that is His blood.  Jesus calls Thomas to repentance and to faith.  Jesus does not shame Thomas into believing but neither does He let Thomas off the hook.  Blessed are those who have not seen and yet have believed.  Fear is the mind-killer and the little death that can only be answer by the Word and Sacraments which deliver Jesus to us behind the locked doors of fear in our hearts.  That is why the doors of the Church cannot close.

What happens when we neglect the Word of God, the House of the Lord, the Table of our Savior, and a life of prayer?  Fear will gain the upper hand and it will not be long until fear turns into bitterness and anger.  Unless I see and touch the marks in His hand and side I will never believe.  What happens when we absent ourselves from the means of grace?  Well, look around you.  A year of pandemic and threat and our numbers are smaller, those who assemble in the Lord’s House on the Lord’s day has been reduced by the power of fear.  Some may return but others are lost.  The fear that held them captive has killed off their faith and without the voice of God preached into them and the baptismal water to remind them and the Holy Sacrament of Christ’s body and blood to feed them, they have surrendered their faith to their fears.

When pastors harp on going to church it is not because they like big numbers or because it makes them feel better to see full pews over empty ones.  Of course these things are true and they appeal to the vanity of every preacher, me included!  But when pastor preach against skipping church, forgetting Bible study, putting off prayer. . . it is because this is the surest way to lose your faith.  The second largest church in the world is the church of those who used to be Christians.  Imagine that.  Larger than any real  Lutheran church body is one called Used to Be Lutheran.  It is true of every church.  The lapsed in every age outnumber those present on any given Sunday.  But the loss is not to the Church – it is the loss of faith to the people whom God loves and to whom God speaks peace and an end to the reign of fear.

American Christianity has staked its claim to having an individual relationship with Jesus and we have bought into the lie that the Church is optional to this relationship.  We have a cowboy mentality – me and Jesus against the world!  We mock the Church and criticize pastors and ridicule doctrine and when threats come, we deem the Church non-essential.  We presume an online sermon or virtual sacrament is enough. Is it no wonder the pews are empty and the children do not take the faith seriously?  If we have not surrendered to our fears, we have surrendered to our pride – we don’t need God or at least we don’t need Him right now.  St. Thomas tempted God and we as a culture tempt Him all the time.  But we are so foolish that we do not realize that we are the losers, not the Lord.

Jesus comes to the locked rooms of our hearts and lives over and over again.   He comes with the
wounds that bring healing, with the scars of His victory, with the fruits of His faithfulness, with the redemption paid for by His blood, and with hope that answers the power of fear.  The spirit is willing and the flesh is always weak but too often the spirit is also weak and that means the flesh is dead.  Brothers and sisters in Christ, dear people loved by God, do not surrender to your fears.  Fear will hold you captive, it will choke off your faith, and it will leave you alone in your sins and death.

The Lord calls us forth from the prison of our fears, from the arrogance of our pride, from the destiny of death.  On our own we are weak and we are vulnerable but standing together in Christ we are strong enough to meet every enemy of Christ, every deception, and every fear.  On our own we will wither and die but connected to God’s Word and truth, hearing that Word preached into our ears and minds and hearts, and being fed and nourished upon the flesh and blood of Christ, we will be sustained in our baptismal hope and in the promise of everlasting life made to us in that water.  And the life that matters will own us and we will own it in Christ and it will never end.

So come, sons and daughters of Adam, brothers and sisters of Thomas, come and hear, come and receive, come and believe.  For the Lord who has brought you out of this body of death and sin has come here to this Upper Room.  He has walked through the locked doors of your hearts and your fears.  He has spoken peace to you once more, preached that peace into you, and now feeds you at His table of peace, where the reconciliation grace of God becomes our food for everlasting life.  Come.  Do not be afraid.  Do not be ashamed.  Christ is here.  With forgiveness, with life, and with salvation.

Alleluia!  Christ is risen!   He is risen, Indeed.  Alleluia.  Amen.