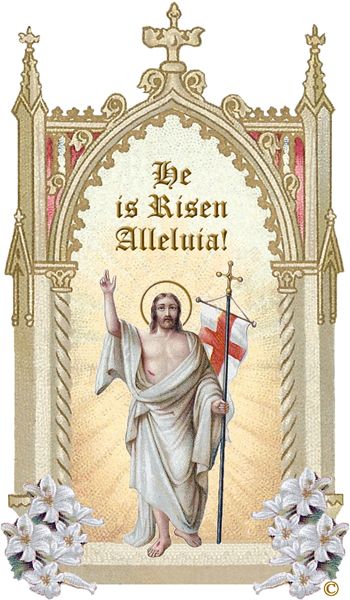 Alleluia!  Christ is risen!   He is risen, Indeed.  Alleluia.
Death with dignity has become the phrase for our time.  Across America and the world people have come to the conclusion that when life becomes too much, you should have the choice to end it all without pain.  In our conflicted values, at the same time we have decided that a life unwanted has no value and the mother should be free to end without restraint.  And last year at this time we were shutting down an economy and radically altering the shape of our lives for the fear of pandemic.  We don’t know what to do with death and if we don't know what to do with death, then we are not sure what to do about life.  The confusion may not seem like such a problem until it is your death or the death of someone you love.

Part of the way we deal with death are the rituals of funeral home, viewing, and funerals.  There are things beyond our control but we if we can manage to decide the details, we think it might help.  We are not the first.  When the Sabbath put an end to the grieving, Mary Magdalene and Mary the mother of James and Salome did what we do.  They attended to the funeral details to help make sense of it all and find some peace in a death in which there was no dignity and no peace.  So at sunrise they gathered up what they needed and headed to the tomb to finish the burial job.  At some point they realized the grave had been sealed and wondered who might give them access to Jesus’ body.

Then everything changed.  The bent down to enter the cave carved into stone, trying to be strong and prepared for what awaited them.  Nothing could have prepared them.  A young man they did not know was there but Jesus was not.  They were alarmed.  The hurt of death was magnified by the missing body and their failure to anoint the corpse and finish the burial job.  In the shock and silence, a voice called to them.  Although this voice told them not to be afraid, their fears were not calmed by what he said.  “You seek Jesus of Nazareth who was crucified; He is risen; He is not here.  See where they laid Him.  Now go and tell His disciples and Peter He is headed to Galilee where you will see Him just as He told you.”

There was sheer terror in that tomb.  The angel was speaking but they were not hearing.  He was trying to shine light but they were still in darkness and confusion.  So they fled.  They ran from that place and kept the secret of what they had seen and heard because they were afraid.  Afraid of it being a lie and even afraid of it being true.

Are we any different?  We find our comfort in greeting family and friends in the funeral home, in visiting and tending the grave, in carrying around the ashes with us, and in remembering birthdays, anniversaries, and holidays the dead are missing.
We struggle to get rid of death’s things as quickly as possible – the hospital bed, the clothing, the shoes, the mementoes.  We divide up these things to reorder our lives and comfort our sorrowful hearts.  We grieve.  We mourn.  We shed tears.  We are angry. We go through the motions.  We sit in darkness.

Jesus did not only die for sin, He died to kill death.  He died to take away the false comforts of the things we do that must be done.  He died to finish the job He had been born to do.  Having accomplished all things to save us, Jesus did one thing more.  He gave us a pathway through death, a way through the grave to real hope.  He rose to open heaven to us and to all believers.  He rose to take death’s sting away and to rob the grave of its last word.  He brought life and immortality to light through His resurrection.  It is not death has been made easier or explained away or set in context.  Christ has risen so that those marked with death might rise with Him to new and everlasting life.

Though we are sorely tempted to look at death the same way people always did, we see death now through the lens of Christ’s resurrection.  What that means is that our consolation cannot be satisfied by memories nor can our grief be answered by the old and familiar rituals of death.  Our consolation flows from Christ’s resurrection which is the precursor of our own joyful resurrection from the dead to everlasting life.  Our grief is answered by the promise of a great and grand reunion with those who have departed this life in faith, who died in Christ and who now live in Him.

Easter is not a surprise ending for us.  We have heard the story before.  What we struggle with is not hearing the story but believing that it has made every difference in how we live, how we die, how we grieve the death of those whom we love, and what to expect from it all now that Christ has been raised.  The women fled from the tomb because everything they knew had been transformed by Christ’s resurrection.  Once the shock of this news wore off a bit, their fear came from the fact that the old had passed away and the new had come and with it a brand new look on life and a new life entirely.

Friends, that is exactly where we are today.  What once satisfied the grieving cannot satisfy us any longer.  What once gave us comfort is no longer enough.  What once was met with fear, is now met with the Alleluias of an Easter people rejoicing to know Christ and the power of His resurrection.  Jesus IS the Way, the Truth, and the Life.  He is the first born of the dead, the first of many to follow.  He is the Redeemer Job looked forward to with anticipation.  He is the Lamb who was slain and who now lives never to die again.  He is the Mighty Redeemer leading a captive people from the painful shackles of death to the promised land of life stronger than death.  He is the great Lion of Judah ruling and reigning.  He is the second Adam to undo the first Adam’s sin.

Your life He has rescued from death and the grave.  Your hopes He has vindicated. Your grief and mourning have an end.  That is what the women discovered in that tomb. Jesus had given them the pledge and promise of it all before it happened but they were so attached to the old ways and the old understanding of life that had to give way to death that this is all they could imagine.  Until an angel called them out of their fears and into the light of Christ.  The tomb could not hold Him.  It cannot hold YOU.  It has become the bed on which we sleep until Christ awakens us to everlasting life.  It has become the door Christ has opened that we may follow Him to eternal life.  It has become the gate which Christ, the gatekeeper, has opened to us and all believers.

There is no dignity in death, no peace to make with the grave, and no justice to the darkness that steals us away and those whom we love.  Death is not our friend nor is it a part of life.  Death is the enemy, the last enemy to be overcome.  Sin was overcome with the blood of Christ.  The Law was blunted by the righteousness of Christ you and I wear.  And now, on Easter, we rejoice that death has met its match.  The power of death is sin and the victory over sin belongs to Jesus and to all those who live in Him by baptism and faith.

Here at this table is the crucified and risen Lord.  He will feed you His own flesh in bread and His own blood in wine, the food not to pique the memory but the taste of the future.  Here, today, in this Easter Holy Communion, we eat the bread of heaven and drink the cup of salvation, and the glorious body and blood of Christ live in us, as pledge and promise of that day when we shall be raised in Him to live with Him and all who have loved His appearing.  And on that day, tears will no longer flow, hearts will no longer grieve, and the endless alleluias will begin to be sung forevermore.