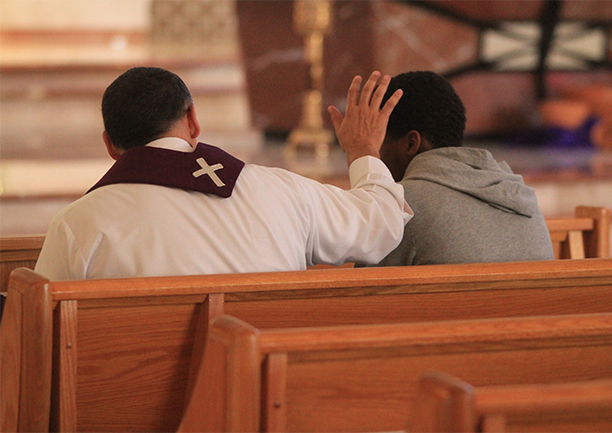 Though it remains a largely hidden blessing and its cause tarnished by the ultimate Lutheran insult (it's too Catholic), private confession was never abandoned by our Lutheran Confessions as it has been by Lutheran people.  How sad it is!  So much of what troubles us as individuals and as a church body could benefit from the particular means of grace that such absolution bestows.  But it has been a struggle from the earliest days of our Synod and long before the rescue this blessing from its obscurity by those who think they do not need it and therefore do not desire it.

So many fail to recognize the special comfort that lies in the private absolution is [due to the fact] that they do not vividly recognize their sins. They may say: “I have no need of this. I can sufficiently comfort myself from the general absolution.” However, is it not possible that a true Christian would not at times be so weighed down by his sins that from his heart he would gladly hear the voice, “your sins are forgive you?” Or are there today Christians with the kind of strong faith that people sought in vain at the time of the Reformation?—C. F. W. Walther, God Grant It!, p. 787-8.

I would suggest that the problem lies not with the private aspect of it but with the confession aspect of it.  We live in an age in which most sins have become normal and ordinary -- no longer even sin.  With that has come the lack of a conscience burdened by sin and seeking relief.  A perfunctory general confession that mentions no particular sin by name is accompanied by an equally general absolution that does not respond to specific sin and somehow we walk away good to go.  It is done.  No more feeling bad about anything.  But this superficial confession and generic absolution does not provide the cover for the sins we cannot forget.  For this, private confession and absolution remains the answer.

Now, I am not saying that such general confession and absolution is hypocritical or that the faithful are not sincere.  On the contrary, I believe that those who come are heartily sorry for their sins and sincerely repent of them.  But they have been catechized by years of neglect of this sacrament and they have a world around them insisting that nothing they have thought or said or done is really all that bad and therefore they have become satisfied with the general act of contrition and absolution that does not provide the fuller and deeper gift that the private act does.  It is like going through life eating ramen noodles and thinking this is what Asian food tastes like.

There is probably little that I could say to challenge or invite Christians to know the grace of private confession and absolution.  But it remains the hidden gift and blessing that would benefit the faithful in more ways than most could imagine.  I have testimonies of individuals who came nervous and halting to make confession and in the midst of it all let loose a lifetime of tears, regret, sorrow, pain, and trouble for the soul.  There is something about saying your sin out loud before another set of ears that makes it harder for you to pack it up and taking it back home with you.  There is also something profoundly different by a hand upon the head and the absolution given to you by name.  For those who are willing to try, there is begun a whole new path of their faith and piety.

So, start off this new year with an old gift and blessing.  Call up your pastor and ask him if you can come for private confession and absolution.  It will be the start of something good.  And do not worry about what you say, pastors hear all kinds of things about you already from Facebook!  (that was meant to be a joke)  No, really, it is not about the sin and what the pastor thinks of it but the sin and what God thinks and how you carry this burden in your soul -- needlessly.  So just try it.

To Catholic has always been an excuse and a poor one. Luther never wanted to Reform the Catholic Church not leave it. I think we should bring back Confessionals. If you look at may Lutheran Churches in Europe they are still present.