The fallacy of spiritual but not religious. . . 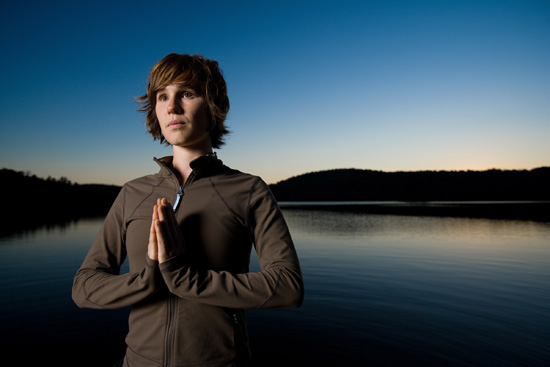 You would have to be living under a rock not to know that there are a great many people who define themselves and pursue a spiritual identity and existence while eschewing religion.  The spiritual but not religious are often seen as prime candidates for religion because they are open to and, indeed, seek out spiritual experiences.  The fallacy of this, however, is that spiritual has come to mean something quite different than it does in the vocabulary of Christianity (and, to a lesser degree, other religions as well).

The folks who identify as spiritual but not religious are a people who value and who seek after transcendent experiences but without God.  Furthermore, they seek these experiences personally and in isolation from others rather than through a community and communion.  It is as common for these folk to seek out a spiritual connection with nature and the cosmos as it is with anything that might approach a deity.  Furthermore, they seek it out as and look for this experience largely alone, as a people who value this personally and individually and who are content with truth, feelings, and experiences that are only one person wide and one person deep.

I read recently of a discussion among Christians about whether it mattered all that much whether or if the people and events of Scripture were historical.  In fact, for some, the question if something did or did not happen was the wrong question when reading Scripture.  It is another evolution of the idea that the meaning of Scripture is somehow disassociated from its historicity and therefore on a higher, dare I say spiritual, level than the real or factual or historical.  This is surely one sign of how deeply the spiritual but not religious have infiltrated the thinking of some Christians.  For the pursuit of spiritual experience and the claim of spiritual identity have little if anything to do with the normal definition of real (factual or historical, for example) and everything to do with a relative truth defined by and determined by the individual.  Spiritual experiences are not about encounters with the truth but with a truth and one which is all about the individual.  This flies in direct conflict with the claim of Scripture to be the truth and a Savior who claims to be the way, the truth, and the life -- apart from which there is, well, nothing.

I suppose it could be said that not all religions have a personal, omniscient and omnipotent God who created the world, who acts with mercy on behalf of the sinner, and who offers a physical resurrection and a life without end in a body that will not die again.  That is surely true of many Eastern religions but it is not true of Christianity.  But that is not the only point of departure.  Religion is communal and involves not simply personal communion with the creator and redeemer God but with the people of God (living and dead!).  Spiritual people may be looking for similar things but they do so alone -- sort of the old you take the high road and I'll take the low road and we will all get to the same place eventually (that is, a common level of personal integration with the spiritual around us -- whatever that may be).

I do not see much intersection between the spiritual but not religious and those spiritual because they are religious.  In fact, I doubt highly that the claim of spirituality can even be an entrance for them into religion -- at least the religion of Christ and the cross.  For my part, I am over it.  A long time ago I tired of trying to turn the spiritual into religion (of Christ) and are increasingly content to let them seek a transcendence with the Transcendent One.  They do not want a God and neither are they looking for communion with others.  For them a virtual world is nirvana.  Perhaps that explains why some Christians who have hunkered down away from the COVID pandemic are so content with what they watch on a screen to replace the in person gathering of God's people around His means of grace.  Could it be that they were spiritual but not religious in the first place -- not loving but tolerating the gathering of God's people together in search of an individual connection to the great spirit out there somewhere?  I do not know but I suspect I would not like the answer to that question.

In the meantime, it will do Christianity no good to find commonality with a people in search of a truth without history or fact, a spiritual identity without flesh and blood, a spiritual oneness with the both of a One God, and spiritual experiences which disdain such concrete things as water, bread, and wine.  Move on, people.  We cannot afford to relativize the Christian Gospel to satisfy those who see their spiritual pursuit without the baggage of a God, sin, death, or a body.  We have enough problems with those who see no difference to try and bridge those differences.  It is high time we called them out and stepped forth to be faithful in the God whom we worship, the Christ who alone is Savior, the sin that His blood has cleansed, the death that His death has overcome, and the resurrection of the body that prefigures our own resurrection of the flesh.