Anglicans are at it again. . . 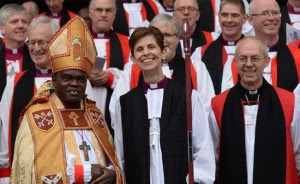 The feminist Anglicans have unveiled their latest campaign.  Now that they’ve succeeded in getting women ordained as priests and bishops they’re pushing for the language of the liturgy to be changed to call God “Mother.”  Here are twelve reasons why you can’t call God “Mother”

So begins a column by Father Dwight Longenecker.  You can read him here.   The good father has given us an expansive list of twelve decent enough reasons why you cannot call God "mom" but really he needed only one.  This is one of the reasons why I sometimes struggle with rationale, often from a Roman Catholic perspective, which refuses to rest simply upon the one reason needful.  Jesus tells us to call God Father.  That is all the reason you need.

But that is the point.  Liberal Christianity has long ago stopped listening to Jesus.  When it comes to the ordination of women, the acceptability of homosexuality, gay marriage, sexual promiscuity, cohabitation, divorce, birth control, etc. . . those who don't like what Jesus says, don't listen to Him anymore.  So why would it be different when it comes to what you call God?

The sad reality is that even for sometimes conservative Christians, the fact that Jesus said it and Scripture teaches it no longer carries all that much weight as an argument to silence opinion or control desires.  We do what we want when we want to do it. . . When it comes to the Bible, it says what we want it to say and we accomplish this by ignoring what it says.

All of this is merely the ongoing power of myth over fact, legend over truth, and my own willful opinion or feeling over the Word that endures forever.  We don't have to explain what Jesus meant when He said to pray "our Father" -- what we are called to do is pray that way.  Period.  Perhaps things will change more for all of Christianity when we stop trying to put words in Jesus' mouth to make Him more palatable to the modern mind and ways and begin to trust that the only-begotten of the Father knows whereof He speaks.
Posted by Pastor Peters at 6:00 AM

We don't have to explain what Jesus meant when He said to pray "our Father" -- what we are called to do is pray that way. Period.

In the same way then, we don't have to explain what Jesus meant when, in the context of Matthew 23, He said, "And call no man your father on earth, for you have one Father, who is in heaven." -- what we are called to do is follow His command in that way. Period.