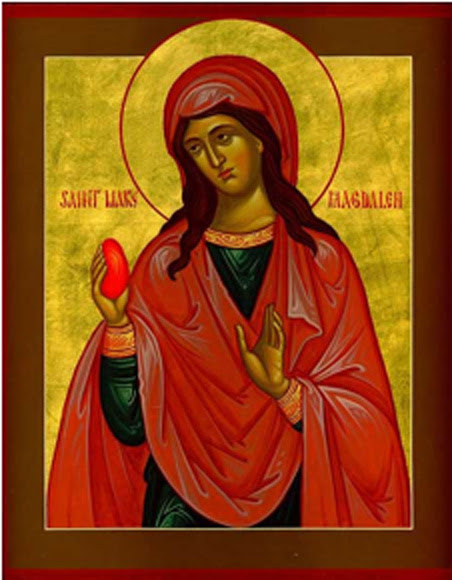 Today we commemorate Mary of Magdala, about whom we know something and of whom much more has been speculated over history.  Sometime in the 4th century Mary Magdalene was equated with the sinful woman, the prostitute, who anointed Jesus’ feet, in Luke 7 and Mary of Bethany, sister of Martha and Lazarus, who also anointed Jesus’ feet as John 11 tells us.  This added to how Scripture describes her by name as the woman whom Jesus delivered from demons (Luke 8 and Mark 16).
Other modern voices have gone much further, describing Mary as the lover or even wife of Jesus who bore Him the holy grail, a daughter named Sarah.  One wag even thinks Mary is the beloved disciple.  So who is Mary?  The East rejected such characterizations.  It is best if we left her as Scripture declared her, the woman relieved of her demons whose tears graced both the crucifixion and death of Jesus and the resurrection encounter with our Lord whom she mistook at first as merely a gardener.  She is named a dozen or so times in Scripture making her a prominent character in the story of the Gospel.
There is no need to enlarge her in death.  Her story is compelling enough as it is.  She was present at the beginning of Christ’s ministry.  What compels us most of all were her tears.  Mary followed Jesus to the cross and her tears fell as He bore the sins of the world alone, her sins, too.  She shed her tears at the suffering beyond agony and then at the death which might have appeared to her to have been merciful, a quick end to His pain.  But her tears led her to the Garden of the Tomb and to the missing body of Jesus which only magnified her sorrow.
Then when tears of sorrow had already swelled her eyes and left her body to ache in the pain of Christ’s loss, she cried anew at the voice that called her by name and surprised her with the resurrection.  She might not have thought she had tears left until Jesus showed Himself to her and sent her forth, forgiven and charged as witness to salvation.  For she met in Jesus the One who loved her enough to save her, who kept His promises to her, and taught her to love Him.
So it is for us.  You cannot love Jesus with tears of joy until you shed the tears of sorrow over His death for your sins.  It is the pattern of repentance that gives birth to hope.  We despair of our sin until we cannot live with them any longer.  Jesus takes those sins and cleanses us from them with His own shed blood.  And then when we think we can shed no more tears, He teaches us tears of joy.  He died for you and bore your sins on the cross.  He laid in the cold dark grave for you.  He marched into hell to proclaim His victory for you.  He rose again that you might rise from regret to rejoice in the new life now yours by grace.
Mary’s tears signal the path of repentance and faith.  In loss and in hope, from sin to righteousness, to death and for life.  Christ lived and died and rose for you.  Not for humanity in general but for you, for your sins, for your redemption, and for your eternal life.  Not for principle or ideology but for your face, sinner, and for your grave, walking dead, and for your life, O born again.
Today we pray that God may teach us the tears of Mary in repentance over sin, in awe of the love strong enough to die for ornery sinners, and in the joy of eternal life that allows us to flaunt death, to triumph over the grave, and to live forever.  Weep for your sins in repentance and weep for joy that Christ has born your sins and delivered you from death.  Lord, teach us the tears of faith, that like Mary, we may follow You to the cross for sin and to the empty tomb of everlasting life.  Amen.
Posted by Pastor Peters at 6:00 AM

Interesting, too, that Luke 7 never mentions that the woman--whether Mary or note--is a prostitute, just a sinner who anointed Jesus' feet.