What would have been their 65th Wedding Anniversary. . . 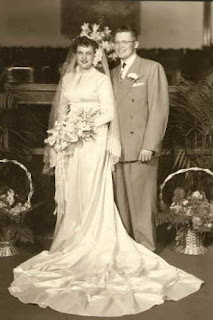 My parents were married July 9, 1950.  This year would have been their 65th wedding anniversary had my father not died unexpectedly in March.  Sixty five years is a long time for anything but it seems to be even longer when considering marriage.  We live at a time when fewer folks are reaching milestones such as this and when marriage itself is undergoing redefinition (both by the Supreme Court and the court of public opinion).  Many are not sure it will survive.  Others are not sure it should.  Such is the state of things.

This year my wife and I observed our 37th anniversary -- a tough year and not much of a celebration (having lost two dads, five aunts and uncles, a couple of cousins, and a host of other challenges I will not mention).  The ability of a marriage to endure is like gnostic wisdom -- people have all sorts of ideas why marriages last and why they don't and all of them involve hidden reasons.  We want a crystal ball before we marry to make sure the person is the right one, the time is right, and the marriage will endure.  Pastors who do pre-marital counseling wish they could accurately predict if this one will last or not.  So do their parents.

Love is important -- don't get me wrong.  But it is not the primary factor in marital longevity.  I believe it is forgiveness.  The shape of love is forgiveness -- God's love for us and our practice of His love toward one another.  This is especially true in the domain of marriage and family.  Forgiveness is the glue that binds husband to wife and wife to husband over the long haul.

My parents had disagreements.  We knew it growing up.  But those disagreements were dealt with by the healing balm of forgiveness.  Disappointments and hurts are always a part of any marriage but the Christian part of marriage is grace of forgiveness learned from Jesus and practiced in the most intimate and taxing of relationships -- marriage.  Love is impossible to sustain amid the angry words and painful wounds of life -- unless there is something to give love a staying power.  That is forgiveness.  Even in death, my mom has things that she will have to forgive of my father if she is to find peace.  It is always that way.  It is not because my dad was a bad husband but because death always exposes our weaknesses and in our grief those weaknesses and failings tend to gum up the healing and comfort of the bereaved.  The first answer to grief at the lost of a spouse is forgiveness.  Then comfort comes and with it the hope and expectation of the eternal life and blessed reunion of the saints our Lord has promised.

Oddly enough, the pro-family Ronald Reagan signed into law the first no-fault divorce act (California, 1969) but it became a model for every other state until there was no blame for any marriage failing -- only a quicker and easier path to undoing the knot.  Cohabitation justified itself once by saying it was marriage without the piece of paper.  Now those who cohabit are choosing not to be married and don't want their cohabitation governed by law (unless it comes down to property and benefit rights to which they believe they are entitled).  Gays want marriage in name but seem intent upon putting their own stamp on what marriage is (gays, at least gay men, that is, are less likely to see sexual fidelity as essential to marriage).  We have many changes in the process and who can say what marriage as a legality will look like down the pike.  But marriage as God's creative order has not changed much.  Complementarity, faithfulness, sacrifice, forgiveness, one man and one woman, and, of course, children remain key to any Biblical definition of marriage.  God has suffered through plenty of attempts to remake marriage and He will undoubtedly suffer through our own tinkering with the idea.  But natural laws do not depend upon our agreement to be true.  They are true by His design.  Just as the rescue of a broken or wounded marriage is also His design.

Perhaps we will not see so many couples observing the higher numbered anniversaries.  I hope this will not disappear.  Fewer, perhaps, but still those who learn that love means forgiveness and forgiveness is the glue that binds our ties. . .  That is what I think about on the day that would have been my parents 65th wedding anniversary.

Prayers,
And Peace on your House.

Yes, Ronald Reagan, the pro-family candidate. He was divorced and remarried and estranged from his children and never attended church. But right wing Christians adored him. -- Morticia

You are absolutely right dear. Marriage is all about forgiveness and love. I also got married to my husband at local event spaces, years ago and we both are still going strong on both of these things.