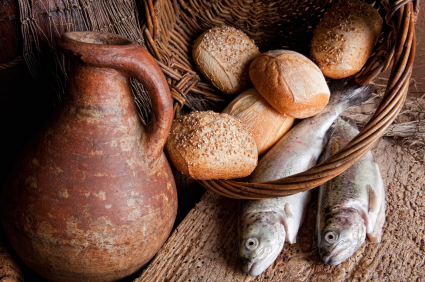 Seven loaves.  In other words, the disciples had enough food for themselves.  They did not have enough for everyone who had followed Jesus into the wilderness to hear Him preach for three days.  The disciples would not have gone hungry but the people were ready to faint on the way in order to find food.

When the disciples said, “How can one feed with bread here in this desolate place” what they were really saying is they took care of themselves, it is up to the people to find food.  They had packed the lunch and were ready for Jesus.  But compassion cost to much to be concerned for those who had come after Jesus without thought for bread.

Jesus asks them, “How many loaves do YOU have?”  In other words, our Lord insists that they do have resources.  The question here is whether or not they will risk those resources.  Jesus took the bread from them and the few fish and it feed the thousands with 7 large baskets of leftovers.  Then he sent them away.

Now there are many things in this story.  The surprise of how Jesus undoes the curse of sin which began by eating the forbidden with the food that only He could give.  There are the leftovers that the disciples had to carry to remind them of their wrongful convictions that they had not enough.  There is the compassion of Jesus who carries inside His own gut the ache of His people for bread that will feed and satisfy.  There is the miracle of grace that multiplied the little for the many.  And one that always intrigued me, the prospect of people who listened through three days of sermons and teaching without thinking of food or comfort.  Where do you find such folk today?

But what I want to focus upon is a stewardship point.  The disciples had enough for themselves.  They were sure they did not have enough for Jesus.  And that is where we meet ourselves every Sunday and Thursday before the offering plate.  Note that they told Jesus what they had – perhaps because they knew it was useless to deceive Jesus who knew their hearts better than they knew themselves.  But before they had a chance to give it, Jesus took it from them.

We think that tithes and offerings only have value if we want to give them to Jesus.  The intent of the heart is pivotal in our stewardship thinking – all of Paul’s talk about the cheerful giver.  But here Jesus took the bread and the fish.  It is a good and laudable thing to surrender willingly what we think is ours to the purpose of God.  But if we will not surrender it voluntarily, God will take it.  He will take it not as a vengeful God who insists we are unworthy of it (which we are) but as the God who refuses to allow us to bind Him up and prevent Him from doing His work.  That is the Law.  You cannot hide or keep from God that which you think is yours.  God knows all things and God claims all things.  He will taken them if you refuse to give them.

But the miracle of grace is that He uses them in such way that you are blessed by them far more in His taking than you would be in your keeping.  Either way the disciples ate.

But when Jesus took their bread, He revealed to them the grace sufficient for all our needs, the miracle grace that takes something little and makes it much more than enough, and the wondrous grace that turns ordinary bread and fish into great spiritual blessings that solidify and make steadfast weak faith and fearful hearts.  The disciples did not give their bread to Jesus to get more; Jesus took what they had and taught them to trust in Him for all things and to rejoice in His mercy.  They ate, too.  And they had 7 baskets of leftovers – more than what they began with.  So great is God’s mercy that when He takes from us, we are left blessed!

The Lord has given.  The Lord has taken.  Like the disciples who had 7 loaves that day, what can we say but “Blessed be the name of the Lord.”  We are the wanderers upon whom God has had compassion.  Or are we are the stingy who think we have by keeping but the Lord takes and multiplies our nothing into His something.  We daily live in the legacy of those whose sacrifices were made not for them but for the future generations they never knew.  We inherit the fruit of their labors.  And we tend to take it all for granted and then react like the disciples when there is need.

Do not be afraid.  We return evil for evil but not the Lord.  He comes with compassion on fools in the wilderness who have forgotten they need to eat.  He comes with miracle grace for fools who fear that what they have is only enough for themselves.  He stretches out His arms in suffering and we bear the fruits of His healing wounds.  God is good.  Not better than we for we are not good.  Only God.  In the miracle of bread we see it.  Now we must walk out this door and live it.  God help us.  Amen.
Posted by Pastor Peters at 6:00 AM