Not wanting marriage but wanting to redefine it. . .

I have said for a long time that the issue in same sex marriage is NOT equality -- GLBT folks wanting to marry with the same definition of marriage as has been operative for all of history.  It is rather the desire to remake marriage itself and those who are pushing for same sex marriage are intent upon reshaping nearly everything that has to do with marriage (from fidelity to the number of partners). 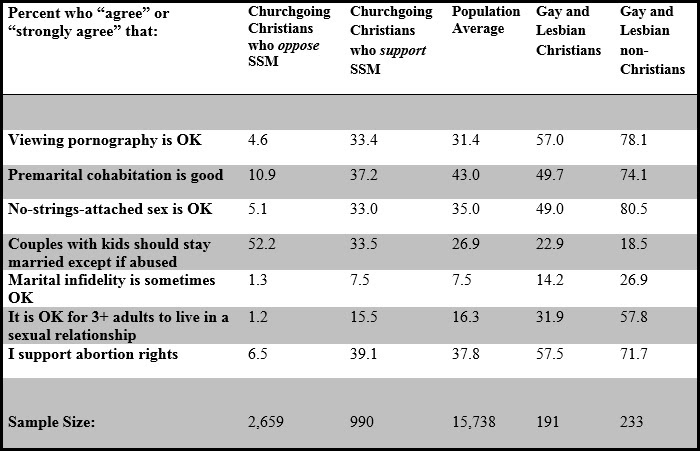 Read here for the full report.   Churchgoers who oppose same-sex marriage sense that they are out of step with the rest of the nation about sex and relationships.

Let me make my point again, the GLBT push for the right to be married is not a desire to be assumed into the definition of marriage that has been normative for all of time but a conscious effort to reshape and redefine marriage for EVERYONE who gets married.  The values to which this group adheres are not compatible with the old model of marriage and the intent here is to change marriage for everyone who gets married.  It may not happen overnight but it will happen. . .
Posted by Pastor Peters at 6:00 AM

Romans chapter one teaches us that the curse of sin is more of it. God turns us over to more depravity. This equality isn't "freedom", just another form of death. I am reminded once again that we aren't just evil in theory, but in every real and possible manner. Christ have mercy.

Interesting statistics. I would agree with you that pushing gay marriage was more about dismantling traditional marriage and redefining it than about allowing homosexuals to legally marry. The homosexual population is 3 to 5 percent of the population, and many of them do not even want a marriage of any type, usually just co-habitating with another homosexual while remaining in "open" relationships to be available for multiple sexual unions. However, the heterosexual population in America today, even among people I know, relatives, and acquaintances, reveals numerous couples not marrying...just living together. Some young women, in large numbers, "hook up" frequently with casual dates, sometimes becoming pregnant. In some cases, I have noted that the couple's can have two or more children, and put off marriage indefinitely. There is absolutely no shame experienced by those who live this way, merely they see it as the new normal. My father, who passed away at 95, lived in a senior citizen community. He told me the older couples were as promiscuous and cohabitating as much as the younger crowd. In any case, I believe many Christian couples will still do it the way God intended. We must not use our present pagan culture as a role model for behavior. Indeed, in many ways, believers have been Pilgrims and Strangers, and that is how it will be until the Lord returns.


The author does not support gay marriage nor the gay lifestyle. Wow, what a testimony! Your thoughts?

From the article: "Now for all well-meaning people who believe I am extrapolating from my experience to the wider gay community, I would like to explain why I believe this is so: From my experience in the gay community, the values in that community are very different: the assumption is that EVERYONE is gay and closeted, and early sexual experience will prevent gay children from being closeted, and that will make everyone happy."