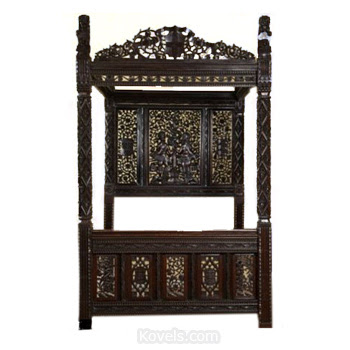 Carved pieces of the four-poster bed that once belonged to King Henry VII (1457–1509) of England were reassembled and sold in 2010 as a 19th century revival for £2,200, about $3,200. A recent DNA test proved it once belonged to the King. It’s thought the bed was made for the 1486 marriage of Henry VII to Elizabeth of York, and it’s highly likely Henry VIII was conceived in the bed. It is now valued as a national treasure at £20 million, just over $30 million.

Well, not THE bed.  Henry VIII apparently wore that one out with his myriad of wives and mistresses.  It was later turned into royal toothpicks when the wood gave up its strength and collapsed in shame.

As one who loves history and who knows the English history, specifically the history of the royalty, is filled with intrigue, wisdom, foolishness, vulgarity, nobility, faithfulness, deception, betrayal, surprise, faith, shame, virtue, morality, lust, and a host of other things. . . I can think of no more sorrowful twist than the fellow who sold the bed five years ago for £2,200 thinking he had finally gotten rid of an eyesore.  Ooops!