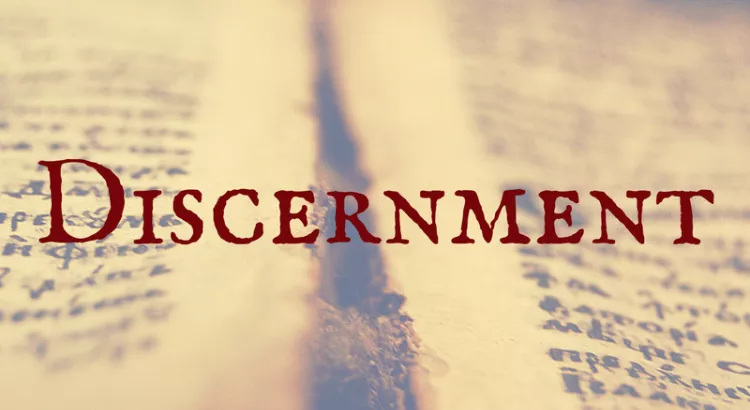 Legitimate discernment is never open-ended but begins with truth, in distinction against error, and moves to its application within the life of the Church.  But this is not how it is being used today.  Those who plead for the ordination of women ask for discernment -- even though Scripture, tradition, and the universal consensus has already said no.  Those who ask for consideration of the wants and needs of the GLBTQ community are not asking for the pastoral application of the truth but a suspension of that truth, an absence of judgment, and an openness to considering a different conclusion than the one Scripture and the catholic witness have given.

When legitimate discernment becomes the highest goal and standard for the leaders of the faith, the Church will hold together, built upon the promises of God and His Word that endures forever.  When false discernment becomes the method of operation within the Church and by her leaders, the Church will devolve into a faint echo of the will, desire, and judgment of the world.  We do not need to discern what God might be saying.  We need  to hold to what God has said.  Those who want us to pay attention to what God might be saying, imagine a God who speaks with a forked tongue, who changes His mind, and whose will and purpose are open to conjecture and change on a whim.  This is not the God of Abraham, Isaac, and Jacob, not the God of the Scriptures, not the God incarnate in Jesus Christ, and not the God of the apostles, prophets, and martyrs.

People of the pews and pastors in pulpits should rightfully be wary of the push to discern where God is saying/leading.  Underneath all the pious sounding words, the direction is generally away from what God has said and done.
Posted by Pastor Peters at 6:00 AM

"Did God really say?" has always been a very effective tool for fooling us poor, prideful humans.
I have sometime wondered what if Adam had stood up as head of the household and said, "Yes, God really did say you shall not eat of the tree of the Knowledge of Good and Evil."
But God knew His children very well...Adam did not speak up... and Jesus and the Holy Spirit are necessary to make us Children of God.
Ex-Deacon, Timothy Carter, Kingsport, TN.

Dear Pastor Peters: I have a request to you and your readers. Many years ago, somewhere in the writings of St. Augustine, I read his commentary on the topic of “spiritual discernment,” as he found it in 1Corinthians 2:6-16. As an introduction, he mentioned that one of his friends had written him about some theological topic, and he, St. Augustine, “discerned” that it was heresy, but he could not put his finger on exactly what was wrong with it. He found the Scripture supporting his views later. He gave this as an example of how the Christian mind, trained in the Scriptures, “discerns”, or senses what is right or wrong, even without being able to give a specific proof.
I have been unable to find this quotation again, after long and hard searches. Does anyone happen to know the place I am writing about?
By the way, the last words of that portion of Corinthians read, “But we have the mind of Christ.” After pondering that statement for many years, I suspect that, had this been written by Rabbi Saul, rather than the Apostle Paul, he would have written, “But we have Torah.”
Peace and Joy!
George A. Marquart