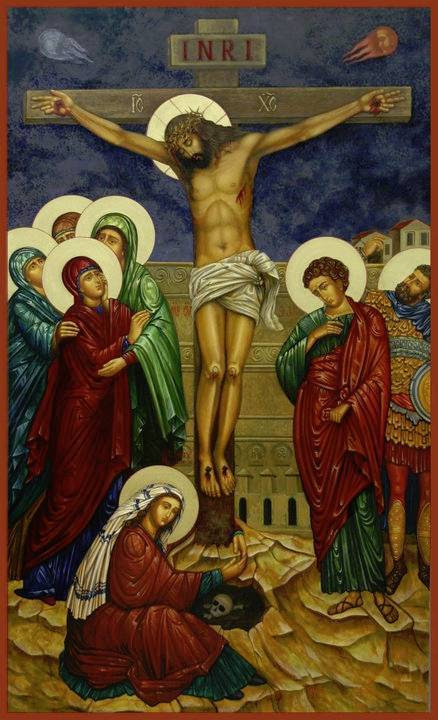 Christianity is defined not by opinion or even decision but by doctrine, by truth.  It might seem obvious but, look around you, the world has done a fairly good job at re-inventing Christianity and making it into something almost alien to the Scriptures and unrecognizable to the catholic tradition.  Protestantism seems to wallow in a slurry of whim, desire, feeling, and experience. It picks at the Scriptures as if it were a buffet and chooses the things it likes and disregards the things it does not.  All of this in pursuit of a better today and a happier life -- all to celebrate when death comes (hopefully after a long and rich life).  Jesus is not much more than a bystander in all of this but He makes people feel better about their self-interest and desires.

One might think that liturgical churches would be more immune to all of this.  A quick glance at the Episcopal Church and the ELCA Lutherans shows that possession of a faithful liturgy is no guarantee of doctrine preserved and a faith maintained in tact.  In fact, some of those who appear rather orthodox on Sunday morning have adopted the most radical approaches to the whole GLBTQ agenda, to the social issues of poverty, climate change, and justice, and to friendship with culture in which it is culture that gives the cues and the churches that give it legitimacy.

In the midst of all of this, Rome once seem more immune to the pressures than others.  The days of tie dyed chasubles and religious Peter, Paul, and Mary songs have waned.  The Latin Mass has seen a resurgence and the younger priests seem more intent upon being Roman Catholic than generations before them.  But the abuse scandal has tarnished the moral authority of the Roman Church and the current Pope seems intent upon creating cracks in the foundation rather than patching them up.  The current Youth Synod illustrates this well in its attempt to listen more than speak and, if it speaks, to soften the doctrinal stance in favor of assuaged feelings on the part of those who find that doctrine unacceptable.

The Church, however, is defined by the Word of God and is expressed in doctrine. Focus groups and synodality or consensus are not the sources of doctrine and truth. We face the strange times of those who refuse the dogma of Christianity but desire a diluted form of Christianity.  The great temptation faces churches is the desire to choose between making people happy and being faithful to the Lord, between earthly success defined by numbers and statistics and the heavenly well done.  When the church fails to make it clear that Christianity is captive not to preference or opinion but to the Word of God, we do not only fail the Lord but we fail those who believe that you can have the church without faithfulness to the Scriptures.  Whether this is due to timidity on the part of the churches or due to an outright disdain for what has always been believed, confessed, and taught, there is no integrity in either.

I might add that while some have accused the Missouri Synod of isolation, of hiding from rather than engaging the world, this is also no option.  While I might admit that Missouri was preoccupied with other things in its past and while it was certainly true that some, perhaps many, in the Synod preferred to remain insulated from and aloof from the world around them, this is certainly a false characterization of the Synod today.  In fact, we face our own group of folks who believe that our historic stands on everything from creation to close(d) communion should be eased in favor of a less dogmatic Christianity and one in which the Word of the Lord is either unclear or includes words that may not bind conscience.

However you look at history, you have to respect that the great disputes among Christians, including the the 16th Century Reformation, considered matters of substance and truth.  They did not ignore or avoid doctrine but debated matters of greatest importance.  They asked the questions of substance that have always confronted humanity -- sin, redemption, grace, mercy, death, good conscience, truth, and destiny.  They followed different cues, sought different authorities, and came to different conclusions, to be sure, -- this is why I am a Lutheran and not a Roman Catholic. But modern Christanity betrays this serious past and exchanges truth that endures for the lie of the moment -- whether that modernity is voiced by those who claim no connection with the past or by those who presume to live in continuity with that past.  Whether in matters of liturgy or doctrine, witness or work, we offer the world the one saving truth of a holy God who made all things, the tragedy of wondrous birthright exchanged for a fallen humanity so dark and deep that only a bloody sacrifice of the incarnate Son of God can atone for this sin and only the risen Son of God can end the reign of death.  Apart from this we have not merely lost the truth but the very reason for our existence.
Posted by Pastor Peters at 6:00 AM

You have not mentioned the Eastern Orthodox in your article. I was once attracted to the EO church. Since many LCMS congregations have decided to imitate the Evangelical mega-churches, I thought that Eastern Orthodoxy would be a safe refuge for me. However, I realized that I would never be accepted as "one of them," as the phyletism among the Orthodox is just too strong. As an American, I would never be fully accepted into a Greek, Antiochian, or Russian Orthodox congregation. Do I really want to try in vain to belong to a closed ethnic social club?

I really do not see the LCMS as a German sect. Sure, Luther and his contemporaries were German, but so what. Many of the Lutheran hymns and publications were originally written in German, but no one seems to notice.

As church denominations everywhere in western Europe and in the English speaking world continue to shrink, will there eventually be a rebirth of the Church? Liberal Christian denominations and Evangelical mega-churches seem bent on self-destruction. I do hope that the general public would be willing to learn that not all of Lutheranism is the "ELCA" and it's partner denominations. I also hope that the world has the patience to wait for the "great global reset of Christianity" to conclude. It would be ideal to see a denomination such as the LCMS rise to lead Christianity out of the ashes.

In other news, Angola refuses to recognize Islam as a religion. I see this as a good sign. Perhaps this movement will spread to other parts of the global South: