Who non-Christians think of as a pastor. . . 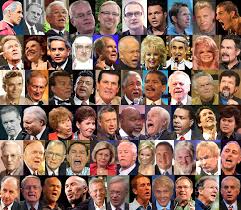 If you want to know the problem orthodox Christianity has, just remember that for the vast majority of those not Christian, it is Benny Hinn, John Hagee, Marilyn Hickey, TD Jakes, Jessie Duplantis, Creflo Dollar, Jamal Bryant, Joseph Prince, Joyce Meyer, the Osteens and and the Copelands that they think of when they hear the word Christian or pastor. They are the most watched, most listened to, and , perhaps, the most influential Christian leaders in the United States.  What they teach and the church they represent is what characterizes the conception most people outside of orthodox Christianity have of things Christian and Christian pastors.  How embarrassing!!

Worse than embarrassing, this is perhaps the biggest challenge we face in evangelization.  Those who are not yet of the Kingdom think they know who Christians are.  They are not like the pagans of old who had no conception of the Gospel before St. Paul proclaimed it before the altar tot he unknown God.  They are not like the peoples to whom missionaries were sent in places far off.  They are not like those who are hearing the Gospel for the first time, they have heard it all before, they think, and they were not impressed by what they heard.  For those same folks have the same level of trust as the proverbial snake oil salesmen of old.  They are seen as self-important people who are more concerned with themselves than anyone else.  They are stars on a stage without credibility and even though they are always on TV, it is the channel nobody wants to watch -- except Christians who have been taken in by their smooth talking and outlandish claims.  This is the world orthodox Christianity faces -- a world of people who think they are the best Christians ever but whose Christianity is generally suspect even by those who know nothing of the real and authentic Christian faith.  Our work of evangelization must begin by unmasking those who are wolves among the sheep and actors on a stage who view the Scriptures as a tool and who presume to know the secret mind of God.

When orthodox Christianity panders to those outside the Church and mirrors their music, their ethics,, and their culture, those outside the Church hear and see those above named folks and feel absolutely justified in rejecting such hypocrisy.  That is why it is more urgent than ever to hold to the Scriptures, to remain firmly within the catholic and apostolic tradition in the doctrine we confess and the practices we do, and why anything we do that looks or acts or sounds like them will be rejected out of hand.  Creed and confession, liturgy and piety, sacraments and service must be authentic, born of the Scriptural institution and lived out in continuity with the faithful who went before us -- this is what we are called to do and to be and we can afford no less than the full truth of Christ.
Posted by Pastor Peters at 6:00 AM

I wouldn't lump Archbishop Fulton Sheen in with those pie in the sky Christians you are talking about.

What most of the TV Evangelists you mentioned in your first paragraph
have in common.......They teach and preach the Health and Wealth Gospel.

This is a distortion of the Biblical Gospel of Jesus Christ. These
TV Evangelists believe that if you have enough faith in Christ, he
will make you healthy and wealthy. IF you are not wealthy, then you
lack faith. If you are sick and in failing health, you need more
faith to be healed. Christians can have a strong faith and still die
of cancer. Christians can lose their job and still have a strong
faith in Christ.

And there are other major obstacles to evangelism such as the snake handling churches of Appalachia and the picket lines of Hillsboro Baptist Church. It’s as though God puts His elect at a disadvantage and then overcomes the way He did with Elijah and the prophets of Baal or Gideon's Three Hundred Men.

18 For, in the first place, when you come together as a church, I hear that there are divisions among you. And I believe it in part, 19 for there must be factions among you in order that those who are genuine among you may be recognized.

10 The Lord has bared his holy arm
before the eyes of all the nations,
and all the ends of the earth shall see
the salvation of our God.

Take heart and be of good cheer.

Confessional Lutherans already have a strong voice that critiques the theology of American Evangelicals:


After listening to Chris Rosebrough for a month, the decision to join a confessional Lutheran church should be an easy one.