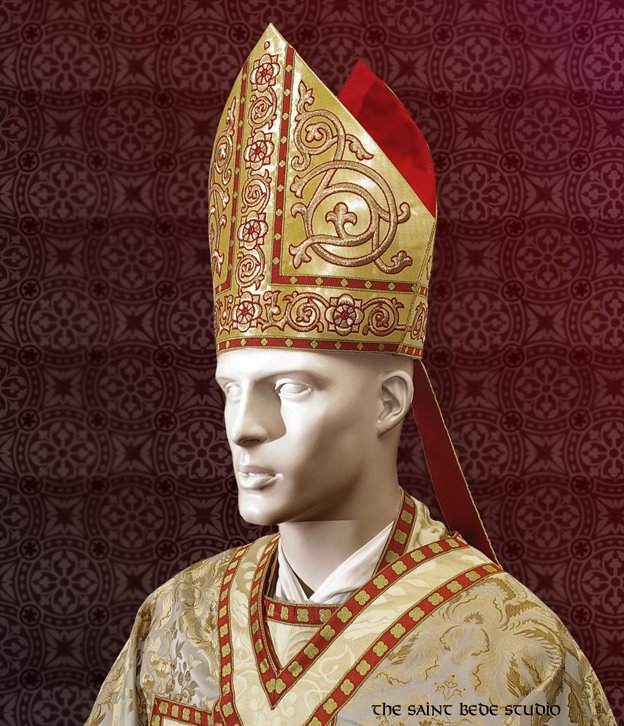 Although bishops are not quite elected in the Roman Catholic Church and are elected among Lutherans (District Presidents included), it does seem to matter all that much.  Rome is in a mess for those who passed muster and were consecrated to the episcopal office.  Some of them have proven most adept at spending money and hiding problems.  Others have proven to be rather good at doing nothing at all.  Still others have presided over a shrinking diocese, clergy scandals, and an office that seems to bow at the altar of what politicians think.  There are some but not as many as should be who are strong, unmovable, steadfast, and stalwart.  Lutherans, due to elections, tend to elect those who have made friends and influenced people on their way up the leadership ladder -- but even more importantly, they have done nothing to tick off their friends or rile up their enemies.  In the end, both Rome and Wittenberg tend to elect and appoint people as if it were a beauty competition or popularity contest -- and one in which talent is a rather small part of it all.

I am sorry if I have offended.  But the reality is that overall our leaders have not distinguished themselves greatly.  They say good words but find it hard to act on them and they act more in the self-interest of themselves, the people, or the church rather than for Christ.  They script meetings so that little of a deliberative assembly survives.  They can be more concerned about what will pass over what is good, right, and true (for the sake of the Gospel).  They treat questions as challenges and interest as offense.  Information is power and they reserve both information and power for themselves and those who are like-minded.

But it is not quite their fault.  After all we either approved or elected them.  We -- pastors and people in the parishes -- have worked hard to neuter our leaders and to make them beholden to us.  This is especially true for those who are elected but it is no less true of those whose election we have no power over.  The very people whom we thought were to speak truth to us and to the world have become the people to whom the truth must be spoken -- against all the reasons and rationale why they are doing the best they can.  But we must admit that we have an aversion to strong leaders.  We live in our parishes and in our communities like little fiefdoms ruling over our square foot of God's Kingdom pandering to the people the same way we accuse our leaders of doing.  And the people are happy about it because they want leaders who make them feel better more than leaders who will tell them the blunt and unflattering truth.  When we do get a leader who dogs us like one of the little barky von schnauzers, we either ignore them or discredit them.  We would rather have leaders who tell us what we want to hear rather than those who tell us what we do not want to hear.

The almost year past has shown us the cracks in our foundation.  Large parishes who act as if they can do whatever they want and small parishes who think they can squeeze by and all the parishes in between need to wake up and pay attention.  Evangelical wannabes are not serving the confession and are compromising the Church in dangerous ways.  Those who want the message to change with the mood of America and those who live in a their own world need a wake up call.  We will be judged not by our numbers or customer satisfaction but our faithfulness to God's Word and works.  I look in vain for any Scriptures to support the idea of a popular Church but I find all sorts of references to a Church under persecution, threat, and trial.  Maybe filling the pews is not as important as being faithful in proclamation and practice.  After all, if God had wanted to fill the pews, He would have easily figured out a more popular means than a cross once for all and a people who walk in the way of the cross toward a kingdom they can neither see nor grasp except by faith.

So we have ended up as loose confederations of like minded people among whom oversight of doctrine and practice has been replaced with back scratching and smooth talking.  Conservative or liberal, we would rather have do nothings in our high offices rather than people who might challenge us to the hard things of faith and life together.  And the end result is a mess.  Whether Rome or Wittenberg, everyone is doing what seems right in their own eyes -- but this not toward individuality is hardly God's pleasing or doing the Church and the faithful any good.  We may not all be sure what to do with courageous leaders who stand for the right no matter how popular but it is about time we got some and supported them even when they were speaking truth to us that we did not wish to hear.  So, if you want to know what I want for Christmas, it is leaders who are men of courage and faithfulness and pastors and people who will in humility hear and heed their calls to be upright and faithful.

"Although bishops are not quite elected in the Roman Catholic Church and are elected among Lutherans (District Presidents included)..."

This imaginary view is similar to another LCMS member, who stated, "I was sort of imagining a fantasy world where the DPs were bishops and acted as bishops."

In the Missouri Synod, the synod convention and the CCM have repeatedly pointed out that District Presidents do not have the title of "Bishop," nor does the DP office equate to the office of a Bishop, especially since the Missouri Synod has what still could be called a "congregational polity."

"In the end, both Rome and Wittenberg tend to elect and appoint people as if it were a beauty competition or popularity contest -- and one in which talent is a rather small part of it all."

Perhaps, instead of Wittenberg, you were alluding to Kirkwood.

Sound and appropriate words, brother Peters! The Lutheran prophetic spirit is not as far gone as the Anglican one, but it comes close in the State churches and in some synods. The European division of the Lutheran church into national synods, and in America originally, into state synods, was one of its saving graces--seen in hindsight. When I say that I am "Missouri Synod" I am saying that as a pastor I still have the independence to follow the Scriptures and Confessions that the state synod system provided. I have the independence to do so, and have exercised it, but it has often meant that I have had to "move on" at various times in my career. :)