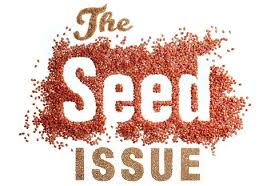 I read of the closing of a 130 year old seminary in England. The details are probably not unusual -- declining enrollment, rising costs, uncertain future, and son on.  But there was a small detail in the story that stood out.  The seminary's motto was Spes messis in semine – the hope of the harvest is in the seed.  It was a profound motto and was chosen at a time when all the foreseeable tomorrows seemed bright.  Now it rings hollow into an institution that is empty and ending its mission with a whimper.  But the motto is spot on and it illustrates that the crisis we face is not about money or people or programs or resources or facilities or anything else like that.  The crisis facing Christendom in this second decade of the twenty-first century is a crisis of faith.

What probably killed the seminary is what is killing the Church nearly everywhere in the Western world.  It is the abundance of prosperity in which God is not so necessary for a full, rich, and seemingly happy life.  It is the empty vacuum of modernity with no truth, no sense of history, and no hope.  It is the distraction of technology and a world that is hardly virtual and certainly not real.  It is the preoccupation with self, the glorification of the individual, and the bias of me that supersedes everything else.  It is the Church convinced that a more palatable truth, Gospel, and message will renew and restore its dying fire.  It is a ministry which delights in nearly everything but the Word of the Lord that endures forever and makes relative what is eternal and eternal what is passing away.  It is truth that has become an idea, detached from fact or history, and a faith that is theoretical but not practical.  It is a vocabulary from Scripture exchanged with the language of culture so that people hear an echo of themselves from the Church and her pulpits instead the piercing sword of the Word of God.  It is worship that has been forced to entertain, amuse, distract, and make happy a people who need a solemn encounter with the Most High God on the holy ground of His very presence in this world.  It is sin and death which have been forgotten as categories and therefore roam free to imprison a world while God promise sinners marked with death forgiveness and life.

The problem is not the seed.  Remember how the disciples feared that it was a seed problem.  Maybe we have not progressed much past such convenient blame.  It maybe a problem with the sowers whose voices no longer speak God's Word with conviction or a soil problem unwilling and not ready to receive the seed of God's Word but it is definitely not a seed problem.  That is our crisis.  We figure because we have remade the Church in our own image and stolen the Gospel from the cross to make it easier and seemingly more relevant to the population and still the pews are empty that it is a seed problem.  If we keep on blaming the seed, we will be closing more seminaries, shuttering more churches, and watching as the Church truly does become less relevant.  It is time to admit that the problem is us.  To repent of our distraction and our despair.  To confront the future not of our own making but of God's promise.  To hope beyond hope where eyes see nothing changing and hearts are still weary -- because God will not allow His Church to die.

The hope of the harvest is in the seed, it is the seed.  When we wake up to the fact that doctrine is not an impediment to faith but the very faith confessed, when we begin to think and speak again in the vocabulary of Scripture and the saints who clung to its truth before we even existed, and when we surrender our programs for worship, preaching, teaching, pastoral care, and unfailing witness, things might change.  We have so much, perhaps too much, but the Spirit still works through the means of grace, the Scripture still does what it says, and God's Word will not return to Him empty.  When we start believing this anew and our lives together express the fervor of this unchanging truth, things might change.  But if we keep on blaming the seed and directing God's Church as if it belonged to us, the Church will not die but we will, the casualties of our own presumption and victims of our own hubris.

"When we surrender our “programs” and focus on worship, preaching, teaching, pastoral care, Sacraments that do what God has promised and on witness/vocation… things might change."
Excellent post, Pastor.
Keep sowing the "Good Seed" that is the Confessional Lutheran Church...and trust God to water and grow and prosper what you have faithfully sown.
God Bless the Preacher!!
Timothy Carter,
simple country Deacon.
Kingsport, TN.