Liberal does not mean tolerant. . . 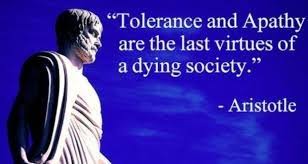 It is a common misconception that conservatives are intolerant and liberals welcome diversity of opinion.  In reality it is just the opposite.  Conservatives believe that the strength of their ideas is enough while it seems that liberals and progressives are not so sure their ideas can or will prevail.  So they allow diversity toward the more liberal or progressive side but shut down disagreement.  The ultimate goal of liberalism is control, not freedom.

The politics of this is not hard to see.  George Orwell has written eloquent fiction to comment upon and warn us against the control of thoughts as well as words.  What he wrote is being lived out among us -- not in some distant land but here.  Government control of everything from health care to gun cabinets to free speech is under much of what we suffered through in the recent election season.  People cannot be trusted to choose and they should not bear the responsibility for their choices so the government is the back drop against the possibility that they might choose wrongly or, having chosen wrongly, might be subject to the consequences.  In such a political system we are all victims but none of us are free and the governmental parent is there to pick up the pieces for us and insulate us against suffering.  The cost of this is nothing less than the surrender of rights and liberty.

Many of us welcome such control.  Either because of fear or the lack of interest in anything but being entertained, we gladly surrender ourselves and our lives to those who know best.  If it is easy, it must be good and the easier the better.  Guarantee a wage to all (whether they work or not) and redistribute resources so that the have nots are more equal to the haves.  Nevermind the messy and inconvenient detail of work.  But, if you are looking for a vast safety net to cushion your fall or protect you from being foolish or wrong, that is what some are ready to provide.  Let the government decide which businesses are essential and which are not, whether worship is permitted or not, and if online versions of everything suffice.  The pandemic has only increased our penchant for the government to take control and relieve us of the burden of choice and the consequence of responsibility.

None of this is without counterpart in the Church.  We struggle today because we are less willing to invest ourselves in the success of our religious institutions.  So much of what the Church does is judged against whether it is relevant to me or desired by me.  Sadly, the reality is that the most unique and effective work of the Church is that which is more difficult to judge relevant or essential by the world's standards.  In addition, the world's influence is felt in the call for diversity of thought, opinion, and judgment about what is true and how it is true.  Ordinarily this means the freedom to disagree with and reject Biblical truth as fact and dogma.  Liberals and progressives in the Church are not known for what they accept as much as for what they reject -- either because it is unappealing to their modern mindset or it violates the standards of truth, justice, and relevance they have adopted from the world.

In so many cases, liberalism is strong on what is required of the Church but short on what is the duty of the faithful.  So monthly church attendance or no presence at worship at all does not work against the definition of a good Christian, Roman Catholic, Lutheran, or whatever.  The Church is required to make every accommodation to the individual (and the family) with regard to time, comfort, convenience, and access but little sacrifice is asked of those who are called members.  Furthermore, the liberal point of view insists that opinions be acceptable to the faith even when they violate the most central truths of doctrine and morality.  In other words, it is expected that there is room among the faithful to believe that the Biblical characters may be mythological or even Jesus may be more legend than historical fact but the requirement that one believe the facts of Scripture and the people real is seen as intolerant!  Unless you get to the particular social justice topics of the day in which deviation from the progressive norm is simply untenable even if it means rejecting Scripture, creed, confession, and tradition!

So also with respect to such things as chanting and a fuller ceremonial.  If you do these and refuse to let these things be subject to poll or preference of the people, you are an intolerant pastor -- even though the intolerance of the people objecting goes without critical comment.  So, for example, when we talked about putting kneelers in, voices would object that said they did not want to kneel.  Even when it was pointed out that there would be places where kneelers would not be and that no one was being required to kneel, the objections continued.  If I do not want to kneel, I don't want anyone to kneel.  So the mere presence of kneelers becomes the objection and those who do not want to kneel themselves do not want it possible for others to kneel.  The offering of kneeling becomes the position of bullying whereby the ones who want no one to kneel becomes the more liberal position.  Effectively the issue moves from what is being believed, taught, and confessed to what is done -- the most comfortable realm of liberalism.

The Church is in less danger of conservatives putting up fences than it is of progressives tearing them down.  Our society is threatened less by those who want an open and honest debate than those who insist that no one can be allowed to disagree with them.  In both cases, we have turned the word liberal on its head and dressed up progressivism into clothing of tolerance that does not fit.

When we speak, our words ought to flow from and back to;
•Scripture -as the source and norm:
•Confessions -as faithful exposition of what Scripture says,
•Creeds - as summary of what Scripture says,
•Catechism - as instructional book of doctrine and Scripture,
•Liturgy -as prayed Scripture.
Pastor Larry Peters. Clarksville, TN. Oct. 18, 2018.
True then...true now. I have submitted these words to our Church's newsletter several times (with attribution) and they have been well received. We are Confessional and that is our strength in this world. Not our strength...but God's.
Thanks you for meandering.
Timothy Carter, simple country Deacon. Kingsport, TN.