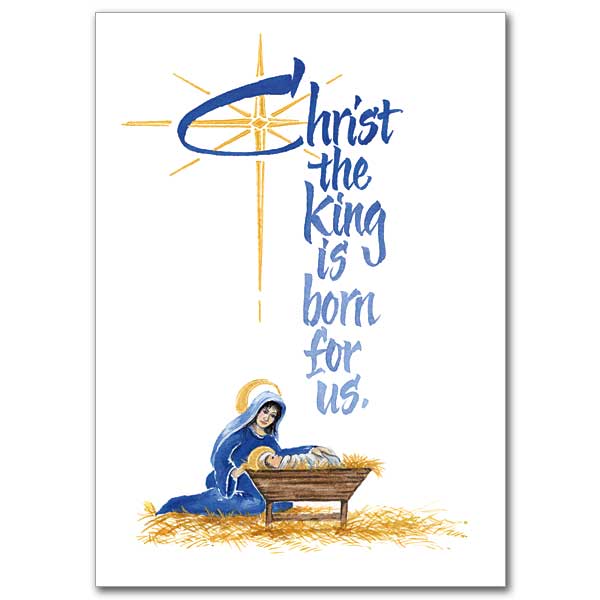 Some years ago, a movie was made about the great clash between Pharaoh and Moses and their Gods.  It was an epic tale largely but not exclusively based on the Bible’s own account of gods and kings.  We seem to like those kind of stories – of mortals and divine beings in conflict.  Perhaps that is how some have portrayed the Christmas story.  There is no shortage of kings in it and there is no lack of divine drama.

According to St. Luke at least four kings are part of the account of Jesus’ birth.  First off is Caesar.  At this point in time, he is the most powerful man on earth, having vanquished his enemies and now setting out to survey his vast domain.  He ruled from Rome, the glorious city of gods and emperors.  At the heart of Roman mythology, Caesar was not only king, he was a god.  It appears that all of this seemed to have happened at Caesar’s timing – a census was to take place while Quirinius was governor of Syria.  But Caesar Augustus fell from power and is now hardly more than a footnote in history.  He is no god and no more a king and remembered most as a detail in St. Luke’s story of Christmas.

Then there is King Herod.  He is a wannabe king and no god.  Herod is under the thumb of Caesar and chafes under the pressure.  He is a vicious tyrant who will strike against the Christ child by killing all the first born sons of Bethlehem.  In his jealous rage, the mothers of Bethlehem cried out in sorrow.  But he is remembered even less than Caesar and were it not for St. Luke and the Christmas account we just heard, no one would have ever remembered this puppet on Israel’s throne.

Next is David.  David’s appearance is almost incidental.  He ruled Israel when the nation was a great power and yet he proved to be a flawed man whose lust was his undoing and nearly undid the whole of Israel with it.  Israel only got a king by nagging at God and by their desire to be like every other kingdom on earth.  Their kings were forgettable, for the most part.  But David’s throne was destined for a greater king who would marry the divinity of the most high God with the flesh and blood of a mortal.  It was his line from which the Messiah King was to be born.  It was from David the royal line flowed and so it was David’s town where Joseph and Mary were headed.

David might seem to be only a variation on the theme of Caesar or Herod except for his faith.  He came to God a sinner and before God he knelt in repentance.
The mercy of God was shown to him and so David lived in the Lord to see the moment when all the hoping and praying would give way to the divine act of God to send His only Son.  David loved the Lord even in his sins and God loved David the sinner.  It would become the type of relationship God would have with you and me when finally a king was born to sit on David’s throne forevermore.

That brings us to the last king.  The only real king.  He is the Son of David, born in David’s city from David lineage, but His reign would deliver up salvation for a whole sinful world.  He is God in flesh, begotten of His Father before all worlds and born of His mother Mary; wrapped in swaddling clothes, the angels sing His lullaby while shepherds come to worship.

We come today as shadows fall and the silence of the night is all around us to hear again the angels’ song, to join the shepherds in adoration, and to tell abroad the good news of the birth of a King whom death could not contain and who holds life in His hand for all who believe.  This is a King not born in a palace but in a stable, not laid in regal bed but in a manger, not destined for earthly glory but for a cross, not too good to die in our place and not too great to ignore the cries of every solitary soul who cries out for hope.  Other kings come and go and their claims to be gods fall flat in the shadow of death and the grave.  But not this one.  Jesus is born of a woman to die as a man for all those born of woman and marked by sin for death.  Jesus is born amid all the pains and struggles, sorrows and tears of real life to end their power over us and to awaken in us the gift of hope.  So across this world as many as the sand on the shore or stars in the sky will come where you have come, to worship the One you worship, to kneel before the only real King.  But we will find Him no more in a manger.  Not on a cross.  And not in the dusty remains of the grave.  We will find Him where He has promised to be.

This is the sign of His promise.  The words that testify to the Word made flesh and speak forgiveness, life, and salvation to us all.  The voice that speaks absolution and our sins fall away.  The water that bubbles up with new life to a people carrying an old death in their bones.  And the bread and wine that feeds us His flesh as good and His blood as drink.  Here is where you will find this King – still serving us with His gifts, still welcoming sinners into His arms, still paying our debt of His sin with His once and eternal sacrifice, and still raising the dead to everlasting life and light.

All the other kings and their stories are about what once was but is no more.  King Jesus’ story is about what will never fade away and what endures forever.  Here, right here, in this place, you are in the coming of the angels singing, among the shepherds kneeling, and among the Magi journeying to meet the Christ.  Here in the Divine Liturgy the holy Child of Bethlehem still beckons you come, still forgives your sins,, and still welcomes you in the rest of the saints and the heavenly places.

Other kings and kingdoms come and go but Christ and His kingdom and all who live in that kingdom by baptism and faith endure forever.  He ruled the night so long ago with His birth, He rules over sin by His death, He rules of death by His resurrection, and He rules in you by faith.  As you depart this place into the night, do not forget this.  May His peace rule in you now and forevermore.  Amen.

To: Amanda, Dulaney, Sarah, and Teresa New Years’ Day, 2021.
I enclose an excellent sermon from pastoralmeandering.org from Christmas Eve, 2020. I read Pastor Peters every day. He has blogged since about 2007. I have happily used my abundance of time to use the excellent “search feature” for “doctrine”… “liturgy”…”Lutheran Confessions”…”sacred spaces” …”Baptism”… “Holy Communion” and it is as good an explanation of what it means to be a “Confessional Lutheran” as I have ever read...anywhere. I recommend you follow…and study his blog.
His Christmas Eve Sermon is really good…I miss Church and the Lutheran Liturgy so much.
Please take the time to read this sermon …slowly with contemplation…thinking about a Pastor preaching in a crowded, happy church on Christmas Eve…like we use to do in happier times.
Please read page 3 closely…I “lightly edited” his closing paragraph.
I added:
• and He rules in you..…. * by faith.…..planted by the Holy Spirit by the Means of Grace…the entire Scriptures preached and sung in the LITURGY with both Law and Gospel…Confession of Sins and Absolution…Baptism…Holy Communion…mainly within the Church…for your Life Eternal.

As a “simple country Deacon” it is hard for me to add anything to such a great preacher’s words…but I truly feel the power of the “Lutheran Worship Liturgy.” I preached for a year in Elizabethton as a Deacon and, while I rated myself as only a mediocre Preacher, I rated myself as an excellent Liturgist…the Liturgy is indeed the Holy Spirit directly speaking to us the entirety of God’s Word…for our Eternal Salvation.

If you are making New Year’s Resolutions, please make this one…return to the Lutheran Church-Missouri Synod. I know Amanda and Dulaney are both “health care professionals” and at high risk… but go…and take me…as soon as the pandemic and vaccines prudently allow. As that great theologian, Dolly Parton, once said, “It will be a blessing to ya.” …and to me.