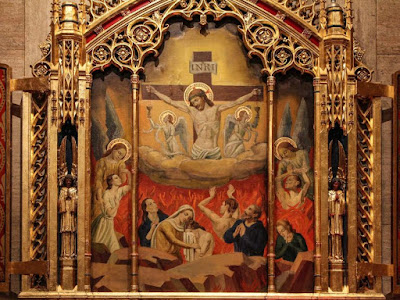 Although I have looked in vain for the source, I read somewhere this great quote:  The Reformation was supposed to make the Church more Catholic, not less.  Apologies if I have incorrectly recalled the quote.  In any case, it is a masterful statement of the expectation of the Reformers.  They were not seeking a Roman Catholic Church Lite or a Church less true to the definition of catholicity or a pick and choose version of Christianity (which is what things have become).  They were seeking a more catholic Catholic Church --- one without the additions and accretions of the ages that had obscured the true jewel of the Church's faith (the Gospel) or distracted the faithful from the redeeming fruits of Christ's atoning work.  That we would need to say this today is a sad reflection on a church that has become more comfortable being Lutheran than Catholic.

By the way, for those who are ready to respond, this has nothing to do with vestments or ceremonies.  They are ancillary to the catholicity of creed, confession, doctrine, and life (practice).  The Reformation was never about choosing which vestments remain or which ceremonies continue but about a faith which was consistent (doctrine and practice) and truly Catholic.  And that is the claim of the Augustana --- not that the Reformers were departing from anything but restoring the gleam and glitter to the bright shining jewel of the faith in the Gospel rightly preached and the Sacraments rightly administered.

Now we have become entirely too comfortable being Lutheran --- looking at the Lutheran distinctives as the non-negotiables of the faith rather than living out the Lutheran claim not to have departed from Catholic faith or practice.  It shows up in things like vestments and ceremonies but it is not about them.  It is about fullness rather than economy, about more rather than less, and about truth that does not change over time.  What we have ended up with is somewhat different than the Reformers envisioned.  We have ended up with a Lutheranism which has tended to be more liberal and progressive than conservative and catholic.  We struggle with a Lutheranism that has trouble saying to evangelical wannabes that this is not Lutheran and to those practicing virtual communion that this cannot be done (rather than it should not be done).  We look across the sea of world Lutheranism and we find ourselves with church bodies that have more members not in worship than in, more people claiming to be Lutheran than can be counted on membership rosters, and ecclesiastical leaders who must depend upon the good will of those who elected them rather than people of stature who can speak with authority against those who say and do things in conflict with creed and confession.

Lutheranism has always looked better on the paper of our confessions than on the practice of our churches.  I understand that.  But the gulf between what we believe, teach, and confess is widening, not narrowing, and the diversity of what it means to be a Lutheran threatens to swallow up the good fruits of the Reformation.  This has always been the case with the unintended fruits of the Reformation (in Protestantism in general) but now it has come to the point where we look into the mirror and see a fuzzy identity staring back at us to replace the clearer and more confident face of our confessions.  I do not advocate for more diversity but for more unanimity, not for more variety but for more consistency, not for more creativity but for more faithfulness.  Where we are going and how we are getting there is not contributing anything positive to the Lutheran identity or cause but threatening our very existence.  So now is the time to hear the call of the Forerunner and repent, return, and renew ourselves, our churches, and our witness.  We need a Lutheranism more Catholic rather than less so.  This does not mean more Roman but more Catholic -- a Church fully at ease with her history and fully confident in the means of grace to sustain and deliver the faithful to the Lord when He comes in His glory.

COVID may end up doing us a favor if we ever get to the point of looking at what got us to the point where sitting at home in our bathrobe with coffee in hand became the equivalent of coming together in the Lord's House on the Lord's Day.  Then perhaps we may actually wrestle through the whole idea of personal preference, the shape of diversity, and the role likes and dislikes play in who we are, what we believe, and how we live out that faith.  We will probably end up with less rather than more people but the cost of faithfulness is sometimes jettisoning those who do not want to be faithful.  We should not be happy about this or at peace with those whom we lose but neither should we allow poll or preference to determine what it is that we believe or how it is that we live out that faith in our life together around the Word and Table of the Lord.

I know of pastors and congregations who are wrestling with this.  It is not pleasant.  We are up against a solid enemy in the form of a church more comfortable with comfort than courageous enough to follow where faithfulness leads.  But we need to stick with it and keep up the good fight.  The Reformation was not fought so that we might survey the faith like foods on a smorgasbord table and walk out with a pleasing plate of yummy stuff.  It was fought by a people who were willing to risk anything and everything in the cause of being truly Catholic.  In the end, I hope and pray we have the guts and gusto to join them.  If we don't, we will die a common death on the hill of diversity.  If we do, we just may find our way down to the other side of that hill, through the fog and dangers to the promised land of faithfulness and the voice of the Lord saying well done.

Excellent post, Pastor.
"not that the Reformers were departing from anything… but restoring the gleam and glitter to the bright shining jewel of the faith in the Gospel rightly preached and the Sacraments rightly administered."
I watched the Liturgy on my computer this very morning...but I very much missed the personal Confession and Absolution and and the comfort of the Lord's Supper. I heard MY choir sing...but was not there. I heard an excellent Sermon of Advent...Christ is coming...be prepared with faith planted by Holy Spirit within the church.
This COVID-19 thing will pass...the Church will survive...faith will survive. I will, Lord willing, get to worship...together with the faithful.. the wonderful Liturgy of the LC-MS: the true catholic church.
Till then, I thank preachers like you for comforting me with the confessional faith.
"Meander On", Pastor. We need your comforting, true words...daily.
Timothy Carter, simple country Deacon. Kingsport, TN.

So very true, and extending far beyond just the LCMS!

We will get trough this thing...if we focus on what the LC-MS Liturgy gives us every Sunday and what Pastor Peters blogs about everyday...Faith...planted by the Holy Spirit...mainly within the church.
We have been through worse...the 1918 Spanish Flu killed about 670,000 people out of a population of about 107 million. In 2020, we have lost (so far) about 265,000 out of a population 3 times larger. Very bad...but hardly the end of the world...or the end of the church.
I agree heartily with Pater Peters when he writes: "we just may find our way down to the other side of that hill, through the fog and dangers to the promised land of faithfulness and the voice of the Lord saying "well done". I am "at risk" and may not make it...but the church will go on...with Faith and Trust in what God has promised.
Timothy Carter, simple country Deacon, Kingsport, TN..

I wonder how this blog post would fare as a resolution at our next LCMS national convention. Since the church gets what she teaches, I fear that we would be as divided spiritually as our poor nation is politically.
The confessors at Augsburg said, "...we have related only matters which we have considered it necessary to adduce and mention in order that it may be made very clear that we have introduced nothing, either in doctrine or in ceremonies, that is contrary to Holy Scripture or the universal Christian church."
May our "ecclesiastical supervisors" be filled with the same Holy Spirit that made Ambrose of Milan a fearless bishop and faithful teacher of the faith once delivered to the saints.