Gone in little more than a generation. . .

According to projections from the Evangelical Lutheran Church in America’s (ELCA) Office of Research and Evaluation, the whole denomination will have fewer than 67,000 members in 2050, with fewer than 16,000 in worship on an average Sunday by 2041. 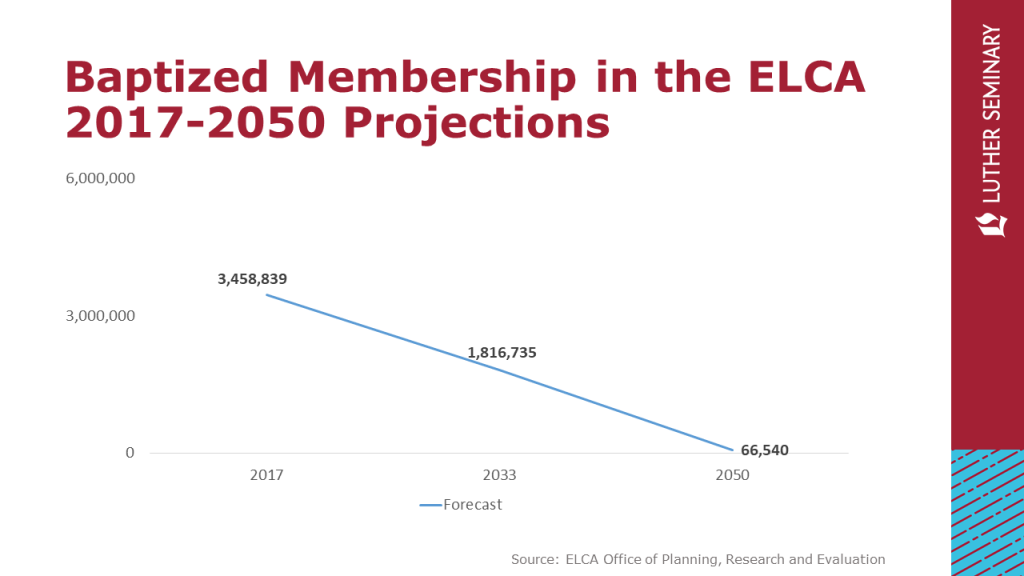 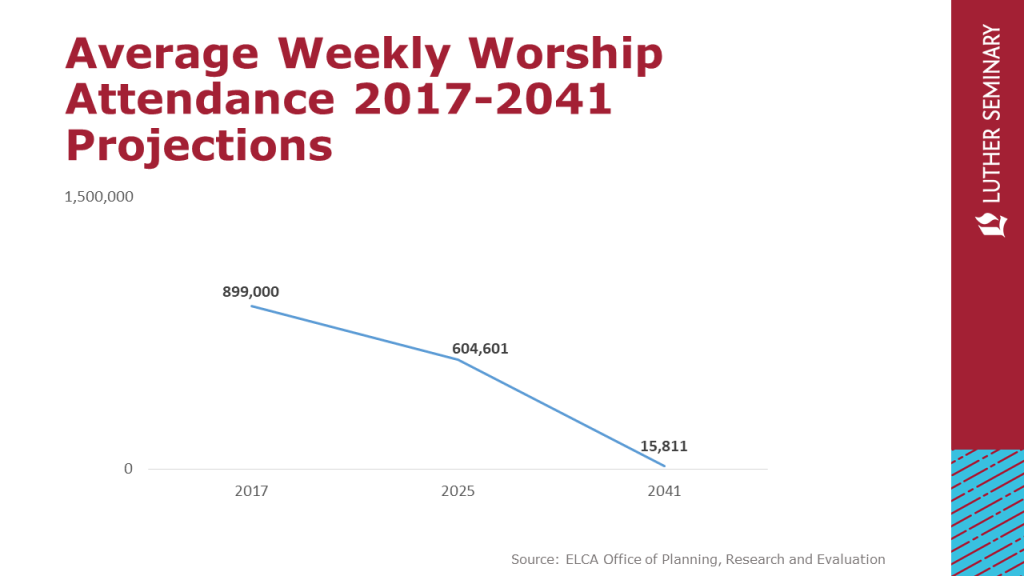 While the ELCA had over 5.2 million members when it was launched in 1988, it has only declined since, and the decline has been accelerating.  Currently, the numbers are somewhere south of 3.7 million members.  The numbers of those who actually worship is even more dismal (and not only for the ELCA!).

Many reasons could be given but the ELCA is a distinctly more liberal (or progressive, if you prefer) church body than it was when it began.  There were disagreements or failures to agree on substantive issues that were put off until later.  Few of those were resolved in a positive way.  So the lingering effects of those disagreements cannot be forgotten as a reason.  In fact, some have suggested that at least in polity it was not a merger but the adoption of the LCA structure.  Even this is not certain since the Synods (what we might call districts or dioceses) have effectively become semi-autonomous units that have created some disparity between them as far as theological stance and practices.  This is especially true with regard to the social positions on sex and gender that have caused two schisms from the denomination (the NALC and the LCMC).

In the end, however, a church body that merely mirrors the positions of the culture and society around it offers little to compel a person to become a member.  The lack of these distinctives may be the primary reason why the bleeding is increasing and the projections look so terrible.  While some may be looking for more creativity, I would suggest that the real problem here is a lack of continuity.  Those who can remember the previous church bodies assumed into the present structure of the ELCA see a church body far different from the one they once new.  Without a distinctive and long standing tradition as a church body and without a distinctive and compelling identity apart from the world around them, the ELCA is a sinking ship.

For those not in the ELCA, there is little room to be smug.  We have our own decline to deal with and our own voices advocating to be more like the world around us and less like the faith of our fathers.  Both ends would put us exactly in the same boat as the ELCA.  We may be listing but it is surely easier for us to right the good ship Missouri than it will be to rescue a church body which has tied its future to the culture and social positions of the people around them and forgotten to make a real case for being a church at all.
Posted by Pastor Peters at 6:00 AM

Long-term straight line projections sometimes are not reliable. Here's a plot of the ELCA-to-LCMS membership ratios based on membership data from 1987 to 2018.

The ELCA's big membership dropoff is immediately following its 2009 decision allowing ordination of active homosexuals and the formation of NALC by breakaway congregations. Whether, in the last few years the dropoff is leveling to a slower decline (relative to the LCMS decline) remains to be seen.

Also some of the slow decline may be related to the slowly increasing average membership age.