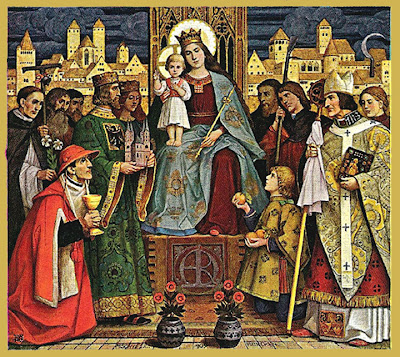 Copied from another website.  My only purpose is to stir the pot a bit.

In regard to the Marian doctrine of the Reformers, we have already seen how unanimous they are in all that concerns Mary’s holiness and perpetual virginity . . . (Max Thurian [Protestant], Mary: Mother of all Christians, translated by Neville B. Cryer, New York: Herder & Herder, 1963, 77, 197)

A new lie about me is being circulated. I am supposed to have preached and written that Mary, the mother of God, was not a virgin either before or after the birth of Christ, but that she conceived Christ through Joseph, and had more children after that. . . . When Matthew [1:25] says that Joseph did not know Mary carnally until she had brought forth her son, it does not follow that he knew her subsequently; on the contrary, it means that he never did know her . . . (That Jesus Christ Was Born a Jew [1523] from Luther’s Works: vol. 45, pp. 199, 205-206, 212-213; translated by Walther I. Brandt)

In chapter 7 he even describes the mother of Christ, the Virgin Mary, how she is to conceive and bear him with her virginity intact. (Preface to the Prophet Isaiah, 1528, translated by C. M. Jacobs and E. Theodore Bachmann; in Luther’s Works, vol. 35, p. 275)

According to His humanity, He, Christ, our Savior, was the real and natural fruit of Mary’s virginal womb . . . This was without the co-operation of a man, and she remained a virgin after that. (Sermons on the Gospel of St. John [1537-1540]; chapter one; Luther’s Works: vol. 22, p. 23; translated by Martin H. Bertram)

He was the only Son of Mary, and the Virgin Mary bore no children besides Him. . . . I am inclined to agree with those who declare that “brothers” really means “cousins” here, for Holy Writ and the Jews always call cousins brothers. (Ibid., p. 214)
John Calvin:

Helvidius displayed excessive ignorance in concluding that Mary must have had many sons, because Christ’s “brothers” are sometimes mentioned. (Harmony of Matthew, Mark and Luke, sec. 39 [Geneva, 1562], vol. 2 / From Calvin’s Commentaries, translated by William Pringle, Grand Rapids, Michigan: Eerdmans, 1949, p.215; on Matthew 13:55)

[On Matt 1:25:] The inference he [Helvidius] drew from it was, that Mary remained a virgin no longer than till her first birth, and that afterwards she had other children by her husband . . . No just and well-grounded inference can be drawn from these words . . . as to what took place after the birth of Christ. He is called “first-born”; but it is for the sole purpose of informing us that he was born of a virgin . . . What took place afterwards the historian does not inform us . . . No man will obstinately keep up the argument, except from an extreme fondness for disputation. (Pringle, ibid., vol. I, p. 107)

Under the word “brethren” the Hebrews include all cousins and other relations, whatever may be the degree of affinity. (Pringle, ibid., vol. I, p. 283 / Commentary on John, [7:3] )
Theodore Beza:
Beza, Calvin’s successor, argued that Catholics and Protestants agreed on the perpetual virginity of Mary, at the Colloquy of Poissy in 1561 (see William A. Dyrness, Reformed Theology and Visual Culture: the Protestant Imagination from Calvin to Edwards, [Cambridge University Press, 2004], pp. 86-87).
Huldreich Zwingli:

He turns, in September 1522, to a lyrical defense of the perpetual virginity of the mother of Christ . . . To deny that Mary remained ‘inviolata’ before, during and after the birth of her Son, was to doubt the omnipotence of God . . . There is a special insistence upon the perpetual virginity of Mary. (G. R. Potter, Zwingli, London: Cambridge Univ. Press, 1976, 88-89, 395 / The Perpetual Virginity of Mary . . ., Sep. 17, 1522)
Heinrich Bullinger:

Bullinger wrote the Second Helvetic Confession in 1562. In its Chapter XI, it refers to “the ever virgin Mary” and “the Virgin Mary.” In Chapter III it mentions “the Blessed Virgin.”
François Turretin:

This is . . . piously believed with human faith from the consent of the ancient church. Thus it is probable that the womb in which our Savior received the auspices of life . . . was so consecrated and sanctified by so great a guest that she always remained untouched by man; nor did Joseph ever cohabit with her. . . . in the New Testament certain ones are called ‘the brothers of Christ.’ It is common in Scripture not only for one’s own and full brothers by nature to be designated by this name, but also blood relatives and cousins (as Abraham and Lot, Jacob and Laban). . . . Nor is it derived better from this-that Joseph is said ‘not to have known Mary till she had brought forth her firstborn son’ (Mt. 1:25). The particles ‘till” and ‘even unto’ are often referred only to the past, not to the future. (Institutes of Elenctic Theology, vol. 2, 345-346)
John Wesley:

. . . the blessed Virgin, who, as well after as she brought him forth, continued a pure and unspotted virgin. (Letter to a Roman Catholic, quoted in A. C. Coulter, John Wesley, New York: Oxford University Press, 1964, 495)
Posted by Pastor Peters at 6:00 AM

Rev. Peters: "Copied from another website. My only purpose is to stir the pot a bit."

Only as long as, it appears, it is stirred in a favored direction.