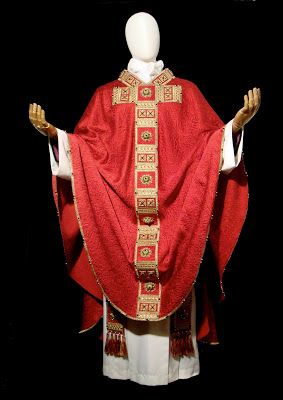 I am confident that no pastor or priest has not heard the snicker of a child pointing at the dress that pastor wears.  We expect it from a child who knows no better than to make fun of what he does not understand.  What is unexpected is when Lutherans who supposed to be adults can do no better than laugh at the old joke and when they have no words to answer the curiosity of the child about vestments.  What is downright foolish is when Lutheran pastors know no better than to call vestments robes and to reveal how uncomfortable they are wearing them while vested for service.  Yet that is exactly what we see far more often than anyone would care to admit.

I suspect such discomfort is for several reasons.  One of them might be to let folks know how awkward these men of God feel in these vestments, how they wish they did not have to wear them, and how foolish they think the whole matter of wearing vestments really is.  Another might be that they don't want folks to think that maybe they like wearing the dress and so they put out the unmistakable signal to all who see them that this is not their style or preference.  But I fear a worse reason.  I fear that the discomfort with vestments is really about the discomfort of hiding away the man and living out the office before God's people.  Nobody likes to wear a uniform that might just be stronger than one's own personality and clothing certainly are a primary expression of taste as well as being an extension of how we see ourselves.  The truth is that too often those pastors who find it hard to wear vestments also find it hard to be a pastor.  This is where the joke ends, by the way.

No where is the pastor more invisible as a man and no where is his role more profoundly noted than when the man sets aside personal taste and preference and dons the historic vestments of the Church (at least in the West) to speak in His name the Word of life, lead God's people in praise of Him whose salvation is revealed in Christ, and to administer His gifts of grace to them.  Nobody cares if Larry Peters forgives their sins but time and eternity hinge upon God's forgiveness.  The names we place upon our children are sometimes foolish and mostly temporary but when God names us as His own in the waters of baptism this is both a great mystery and delight with eternal consequence.  The food we eat is a matter of taste and preference except when the Lord sets His table in the midst of our enemies and delivers to us nothing less than heaven's bread and salvation's cup, the flesh of Christ and the blood of Christ for the forgiveness of our sins and the assurance that we are His and He is ours.

How odd it is that we would presume to dress ourselves for such an office and for such a ministry!  How reasonable it is that we would be dressed apart from the world's fashion and from all that vesture reflects to wear a dress, to be yoked with a stole, to be girded with a rope, and to be covered with a type of seamless robe.  For then it is clearly revealed to all who see us that we are not our own men.  We belong to the Lord, more particularly to HIS service.  The words we speak are not our own but His Word.  The actions which we take are not our own but the actions of His own direction in which His promise is manifest.  It is so much easier to be me than to be God's.  That is the reality.  But the pastor cannot afford to be me when it comes at the cost of God's purpose.  Even when we are not at ease with being God's man in this calling, it is important for God's people to know what this means and for us to be at peace with it.

So laugh with the child who says pastor is wearing a dress but teach the people well what it means to be vested for His service.  For how else will they understand and learn to live out their own place and vocation as the people of God vested with the peculiar clothing of Christ's righteousness?  Ahhh, that is the irony.  Pastors are not the only ones who wear the clothing of another.  All those who are baptized do the very same thing!
Posted by Pastor Peters at 6:00 AM

My parish celebrates the Lord's Supper every other week. Although my pastor wears vestments, I've never seen him wear a chasuble. I suspect this is symptomatic of his indifference to the historical liturgy as prescribed by LSB. We use the Divine Worship settings approximately fifty percent of the time. Otherwise, he has a penchant toward using some sort of hybrid order of worship eschewing the Ordinaries. Thankfully, the LCMS blogs I follow indicate that the historic liturgy and practices are lived out in many churches due to pastoral leadership that values such. I must confess that I am somewhat envious of those who receive a steady diet of liturgical worship. Lord, have mercy.

I was informed many years ago that a pastor's vestments are (at the base level) white because they are supposed to make the man "invisible" so that we, as parishioners, can look past the man and see the office given him by Christ. It's a good lesson. Of course, it's also meant to help identify vocation, as you say - many professions utilize a "uniform."