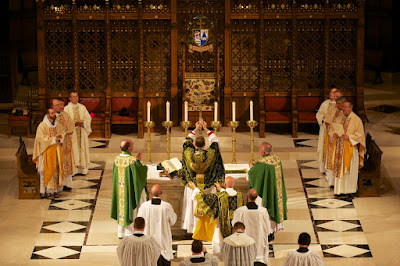 I have always been curious about the colors of vestments among Roman Catholics.  There are those voices that are vehement in their disdain for blue for Advent, for example, but then you see three priests and a deacon wearing green (in the photo to the left) and others wearing white.  What is it with that?

This is not the only example.  I could should hundreds of pictures of masses (Latin or Novus Ordo) with priests and deacons wearing different colors while serving at the same altar (especially concelebrations).  Did they run out of one color and let people pick their choice?  Did they run short and use the only color they had for the remaining priests (perhaps those who were late to the Sacristy that day)?  Is there a reason for this?

Orthodox and Eastern Rite Roman Catholics have a somewhat different approach to the color of the season -- even within themselves much less in contrast to the West.  So I would expect it there but why does it seem to happen so often among Roman Catholics -- even in papal masses?  I wish someone would enlighten me as to where there is rhyme or reason to this or mere accident without any rationale.  The Orthodox can often look like a cornucopia of color when they gather for festive services.  Is there a hidden Roman rubric for this?

Colors are more recognizable at Lutheran altars because it is more likely that Lutherans use paraments.  Many (dare I say most) Roman altars have no frontal whatsoever and the vestments of the priest(s) is the only clue to the color of the day and the season.  Is there are reason for this?  Are Lutherans and Anglicans the only ones who properly dress the altar?  I wish someone had an explanation for this.  It seems like many Roman altars are not works of art that deserve to be left uncovered and yet they are.  I might understand it if the altar itself were a sculpted wonder of wood or stone.  But the rest? 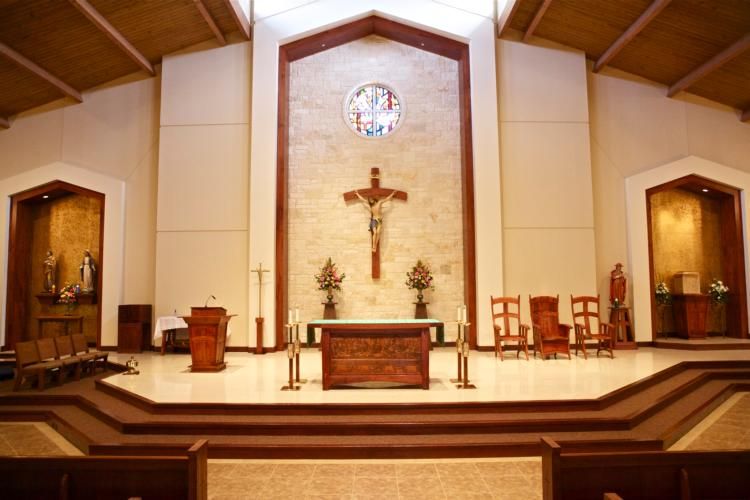 I have been told ghat the main concelebrants wear the color of the day while the concelebrants go to plain white when there are not available the colr of the day.in poor churches white can replace all others.

I recall a presentation at a local circuit forum about the liturgy in which the leader read a description of a mass from the time of the reformation. In the description the various paraments and vestments were a variety of colors. Is it possible that colors were not formalized as much until after the reformation and that this might be the reason they are not as strictly prominent in Catholic churches?

There are other, similar examples of liturgical practice that became prominent in protestant circles before being adopted by the Roman church.

1) The clerical collar. Although various catholic orders had secular dress that identified clergy outside of the mass, the collar we know today had its origins in Anglicanism during a time when men's collar were often very elaborate and very flamboyant. Clergy were encouraged to dress simply and modestly in contrast - hence the simplified collar we now have to day. As a uniform for clergy it was first widely accepted in the Anglican church before being adopted by Rome.

2) The Advent Wreath. There is some discussion when the first Advent wreath appeared. However, the advent wreath as we know it today was first popular in Scandinavian countries as a tool for home devotions before it was used in churches as part of the advent commemoration. It did not become common in catholic churches until the age of immigration in America when Catholics came into closer contact with protestants who were using it.

3) Christmas/Saturnalia/Solstice. This is not a protestant/catholic thing. But it is common today to hear people rant that our Christmas celebration borrowed from the Saturnalia or from the Solstice celebration of the druids. The problem is that most of our modern Christmas celebrations developed within the last 5 centuries, and bulk within the last 2. So why would Christians of the last 500 years adopt practices of celebrations that had been dead and forgotten for nearly 1000 years or more? Further, when it comes to connections between our Christmas and the Solstice celebrations, most of the info on what ancient Europeans did to celebrate the Solstice comes from modern neo-pagans who are speculating on what ancient people did rather than from 1st person accounts and primary sources.

So a lot of the the things we think are ancient are not as old as we think and did not originate where we assume. I have never looked into the history of the colors but I would wonder if it was a similar situation.

Oh, one addition, I do know that less affluent congregations of a century or more ago would use simply green and purple paraments and then add the white and red as they could afford them. So the idea that other colors are used when there are not enough of the proper color to go around does make some sense.

I sometimes think we instinctively have this human need to build on things which, frankly, start out as simple and unadorned. I have a visual picture in my mind of Our blessed Lord walking with His disciples on the dusty roads of Nazareth, preaching in the temple, standing before thousands on the grassy plains, teaching and declaring the word of God. No adornments or fine clothing was worn. It was the Pharisees and Jewish leaders, and later the Popes and their successors, who inspired the traditions and colors which dressed up the church, and took it far way from the simplicity which personified the Savior. As a former Catholic, an altar boy and member of the church choir, and having had 9 years of Catholic education, I have seen my share of pomp and tradition, some of it very uplifting, some of it too regal, too ceremonial, too pompous, too distracting. I had wondered how God sees it. Does it really glorify Him, or is it merely for us? And then I remember that Jesus, although He could have been born in a luxurious palace and worn fine clothes, preferred the stable, and the manger. I wish, how I wish, that the people of God could worship in simplicity and truth. I believe this is what Our Lord really wants from us.

Decades ago, I researched vestments and colors. What came to be viewed as standard in the 19th and early 20th centuries (violet for Advent and Lent. white for Christmas-Epiphany, Easter and All Saints, red for Pentecost and martyrs, green for Epiphany season and Pentecost/Trinity season was the result of two factors: dominant Italian practice of the time and codification for mass marketing by church supply businesses. Later, some Anglicans and Lutherans decided to use (Sarum) blue for Advent. In earlier centuries, there was much more variation depending on regional customs and what was available. Thus, for great festivals, white, gold or whatever was newest and best might have been used. For Advent and Lent, plain unbleached linen was often used, and in poorer locations plain linen was sometimes also used during "ordinary" time. So although I have also wondered about the rationale for colors in these large Roman celebrations you mention, variations are nothing new.