According to an article in Christianity Today online, income brackets which were once unrelated to church attendance are now indicators of church attendance.  Many of the poorest Americans are abandoning church as a group.

"In the 1970s, the difference in church attendance among the four income groups was relatively small (about 5%). That gap has widened significantly over the last four decades, with a noticeable spike in recent years. In 2018, a quarter of the wealthiest Americans reported never attending services, while the share of those in the bottom bracket who never darkened a church door was over 35 percent."  According to author Ryan Burge this is a relatively new phenomenon. 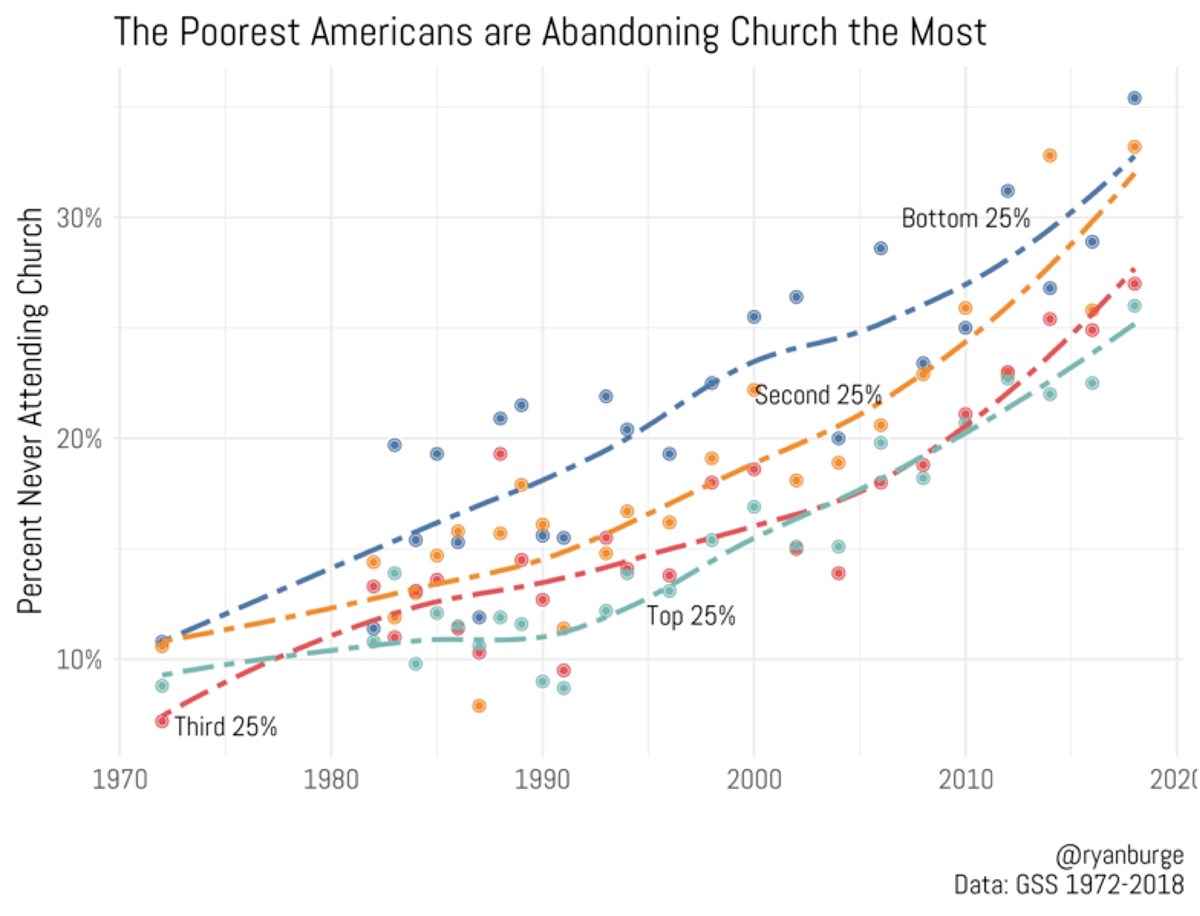 One of the things noted is that people who have less active social lives are more likely to never attend a worship service, although the rates of change are noteworthy.  In recent decades, the move away from church attendance has corresponded with greater social isolation overall for Americans in the lowest income bracket; they have not replaced their church fellowship with other networks serving the same function.

I have for a long time suggested that the virtual social networks of social media do not connect as much as they isolate and replace the face to face connections people need.  It is, in my humble opinion, an unhealthy sign that that our people are retreating from church in the same way they are retreating from other social networks.  I am not at all equating social connections with church and worship but admitting that one may influence the other AND that abandonment of corporate worship inevitably weakens and threatens individual faith.

I will admit that where once people sought out crowds, more and more folks are seeking out smaller venues for social connections and the Church is not immune to this.  We have in my own parish folks who do not like crowds and who will attend on Thursdays a service with a much smaller attendance for the sake of this discomfort.  It does make me wonder, however, if some of the folks who have fallen away have done so at least in part because of this overall retreat from face to face connections with people.

I would be curious as to your experience in this and how you think worship attendance is connected.  While the author is troubled by what folks are missing when these social connections are gone, I am more concerned with how this affects the vitality of the person's faith.  In my experience, once people give up worship, their faith inevitably weakens and may wither entirely.  So does that mean that the poorer folks in the spectrum of income will lose not only their church but their faith?  To what extent is this related to the manifold opportunities afforded by live streaming of services that allow a person to spectate without being present.  Is this good or bad?  So many things to ponder!
Posted by Pastor Peters at 6:00 AM

I would submit that a recent survey (2018 to 2019) by Pew Research
Center would explain church attendance by generations.

Those who identify as Christians:

How many comments on social networks *everywhere* are either arguing or bragging? It is next to impossible within the context of social media to have a discussion without it eventually turning into a heated argument. Facebook knows that in order to attract and retain user engagement, polarizing and controversial posts work best. Post wisely in order to avoid being "flamed."

For example, to find controversy, join a Facebook group. With the exception of sewing and cooking groups, it doesn't matter which Facebook group you join. Even discussions about football can become heated. Groups that allow discussion of politics or religion work best.

Post something in the group. It doesn't matter what you post. There is always someone lurking in the weeds....just waiting to pounce on your post and argue.....nonstop. Somehow, someone will be "offended" and will therefore be ready to debate. Who is ready for a 50+ comment Facebook thread? The person who "feels" offended but has run out of things to write will then resort to personal insults.

Do I feel like walking into church and talking to someone I happen to meet about politics or theology? Nope. I am already burned out from Lutheranism just by reading and responding to Lutheran Facebook comments. Why should I risk being shunned or gossiped about by people I see in church who see my Facebook comments and disagree with me?

Confessional Lutherans are, after all, notorious for rabid infighting. Polemicism is embedded in the LCMS DNA. It might make sense to skip church for a few Sundays in order to recover. I do not want to be tempted to escape the politics and flee to a much calmer, non-denominational congregation. Time to reduce my social connections......

I have always thought that people - regardless of church denomination, were attracted to larger congregations so that they could lose themselves in a giant crowd. They are not looking for social connections. There is safety in sitting in a pew near the back of the church sanctuary.

A Baptist relative once told me she did not need church. She stated all she needed was the Bible. All fine and good, but I would wager that her Bible reading is inconsistent. Similar to weight lifting or running, how many people are going to keep themselves in shape spiritually unless pushed to do so?

I do value listening to KFUO, Pirate Christian, Issues, Etc., and other podcasts while driving my car. It is best suited for meditating while driving down a highway. It beats sitting at home and staring at the computer or moving around and doing the dishes while listening.

While not worship, listening to bible studies and group discussions are stimulating. I do not want to spend the money for a Sirius subscription, I cannot listen to AM radio anymore, and FM radio stations - regardless of format, each play the same 15 songs ad nauseum.

Regarding the "the manifold opportunities afforded by live streaming of services that allow a person to spectate without being present...."

I have mixed feelings about this. In my LCMS congregation, most people sing during the traditional service, and boldly. During the contemporary or "blended" services, most people stand silently and watch the praise band.

Is merely watching a musical (praise band) performance "good enough?" In some non-LCMS congregations, I have seen people attend an auditorium and watch a remote service on a jumbo screen. Just beam the service to seven other church "campuses." The time viewing a service giant LCD screen at church on a Sunday morning or Wednesday night briefly interrupts the time people spend engaging with their iPhones. Church becomes nothing more than another TV program........

By merely watching and listening, is that considered participating? It might quality as such in the classroom, but elsewhere? I do not know.

Do we challenge ourselves as Lutherans and stewards of the Word to be open to outsiders, even those who are poor or working class? - Ted Badje